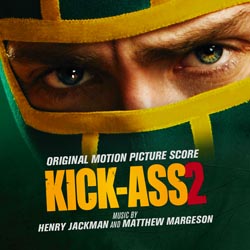 ORDER "KICK-ASS 2" NOW and get your CD booklet autographed by co-composer Matthew Margeson. Autographs are while supplies last and are NOT guaranteed.

La-La Land Records presents the original motion picture score to the all-new feature film KICK-ASS 2, starring Chloë Grace Moretz, Aaron Taylor-Johnson and Jim Carrey, directed by Jeff Wadlow. Acclaimed composers Henry Jackman (THIS IS THE END, WRECK-IT-RALPH, X-MEN: FIRST CLASS, KICK-ASS) and Matthew Margeson (TRANSFORMERS PRIME, SKYLINE, BURNNG PALMS) back the highly-anticipated return of the unconventional heroic duo Kick-Ass and Hit Girl with a full-throttle, super-charged action score as they face-off once more against the vengeful-minded Red Mist. This score is a sonic blast - and the perfect compliment to this rip-roaring, big-screen sequel to the original cult smash. Produced by Henry Jackman and Matthew Margeson and mastered by Patricia Sullivan at Bernie Grundman Masteriang, this CD release contains additional music not available on the digital download version and includes exclusive liner notes from the composers and the director.

Don't Miss out or Get Your Signed Cd! [CLICK HERE]