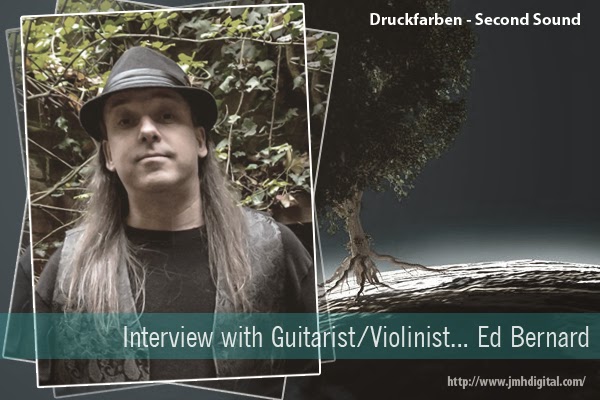 Always giving you more, something cool, something different... I give you a chance to know Ed Bernard - Guitarist/Violinist for Druckfarben. I thank him and Anne for getting this together, thank you.
Jeremy [Howlin' Wolf]

Howlin' Wolf: Please tell us who are you,  what part do you have within "Druckfarben"

Howlin' Wolf: How did you come to be in the group "Druckfarben"?

Ed Bernard: An early version of Druckfarben existed way back in the mid/late 80s with myself and drummer Troy Feener. This current version started in 2008 after the majority of us played an evening of Yes music. After a couple rehearsals I sent an email around asking who'd be interested in playing original music. Will, Phil and Troy were interested and Troy suggested Peter on bass. We did our first rehearsal in March of 2008.

Howlin' Wolf: Tell us something you will take away from your release "Second Sound" and how this may differ from your previous release?

Ed Bernard: Second Sound is in some respects a continuation of our first record but we'd played many live shows by the time we recorded it so we had a greater sense of our style and abilities. Second Sound has a much better vibe and the songs are more focused, even if they are more adventurous. I like the combination of actual songs with complex playing and I think we achieved this on Second Sound.

Ed Bernard: Liberated Dream is the song I connect with most from a lyrical perspective. I kept the lyrics fairly abstract but if someone spends the time I think they'll get a sense of what I mean. It's a very tricky song to play correctly and it rocks too.

Howlin' Wolf: Share a story that happened on stage, how as a group do you handle the situation?

Ed Bernard: A couple years back when we were still playing a lot of cover tunes we played a show at a Polish cultural centre. We were playing "Court of the Crimson King" by King Crimson. We got a little lost somehow and when it came time for Peter to sing the next verse, he sang "the gardner..." then waited for us. We were stumbling along still so Peter sang again :"the gardner..." and again... We finally got it together and finished the song but we were all cracking up and so was the audience. Later in the show I spontaneously blurted out "the gardner" and we all cracked up again.

Ed Bernard: Youtube is a great resource for bands. The internet in general has made it possible for bands to get exposure across the globe. Before this it was a very expensive and nearly impossible thing for 99 percent of bands to achieve.

Technology has made it possible for anyone to make an album. The Internet has made it possible for anyone to get their art to a wider audience. People are always complaining about people downloading their music, and the end of the music industry etc. While I agree there are challenges, it's still infinitely better than under the record company system. Under the old system, Druckfarben would most likely have not been considered marketable or profitable enough to be "allowed" to make an album. As far as MTV goes, I just find it strange that they don't support music, but I guess that's the economic reality of their situation. At least Druckfarben didn't have to spend 300,000 dollars to make a video and give it to MTV for free.

Druckfarben | http://www.druckfarben.ca/
-----------------------------------------------------------
Guitarist Ed Bernard is an in-demand Toronto multi-instrumentalist and composer. A normal workday for him might involve laying down tracks of blistering rock guitar, Dixieland banjo or delta blues resophonic guitar,multi-tracking a string quartet or arranging a full-blown orchestral score. At age 14, Ed was featured performing solo guitar on the popular TV show,The New Music. Within a few years, he was busy touring across North America with several acts including Shania Twin, with whom he appeared on the Jenny Jones show. Eventually tiring of the road, Ed started his own studio, ED ID Productions. Ed has produced numerous independent artists, and composed and performed on television and radio spots for a wide variety of clients including Kraft, Hydroxycut, Dodge Ram, Jeep and Tostitos. He has been avaluable resource to such notable producers as Matthew Gerrard and Richard Evans. Ed played guitar, violin, dobro, banjo, mandolin and ukulele on the soundtracks for 40 episodes of the Gemini Award-winning animated series Glenn Martin D.D.S. and also sang and played guitar on episodes of The Wumblers. He recently scored the music for a documentary about the Group of Seven and is proud to have produced and played on all of the four Druckfarben recordings.