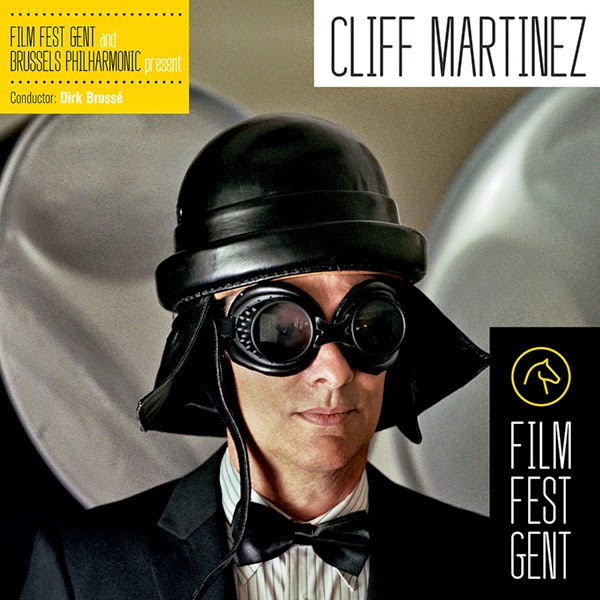 Milan Records will release Cliff Martinez-Film Festival Gent digitally and on CD February 17, 2015.  The album contains orchestral version of Martinez’s film themes as performed by The Brussels Philharmonic this past October as part of the Film Festival Gent and World Soundtrack Awards concert.  Conductor Dirk Brossé orchestrated the recording.

“For most of his films, Martinez created a rather spare, simple and expressive sound,” described Patrick Duynslaegher, Artistic Director Film Fest Gent.  “The combination of the original electronic instrumentation with a full-blown symphonic orchestra adds additional layers of complex musical duality to Martinez’s ambiguous and organic music.”

“When I was first approached about doing an orchestral Cliff Martinez concert and album, I thought the World Soundtrack Academy must be delusional,” joke Martinez.  “But when we started digging into the proverbial closet to rattle a few musical skeletons, this treatment to my scores started taking shape in unexpected and exciting ways.”

“Since the beauty of Cliff’s music often lies in its stylized simplicity, our main concern was to highlight this subtle, transparent yet rich world of sound with crystal clarity,” said Brossé.  “We had to walk the thin line between symphonic and electronic music, complexity and transparency, rhythm and calm.”

Cliff Martinez, who was born in the Bronx but raised in Ohio, moved to California in 1976 landing in the middle of the punk movement.  After stints as the drummer for the Weirdos, Lydia Lunch and Foetus frontman Jim Thirlwell, and the final incarnation of Captain Beefheart and the Magic Band, Martinez joined the Red Hot Chili Peppers (playing on the band’s first two albums) and later the Dickies.  It was during his tenure with the Chili Peppers that Cliff began exploring the new technologies of that era, which would eventually guide him towards the film music world.

A tape Martinez had put together using these new technologies made its rounds, leading him to score an episode of Pee-Wee’s Playhouse. The same recording also ended up in Steven Soderbergh’s hands and Martinez was hired to score the famed director’s first theatrical release 1989’s sex, lies, and videotape.  Martinez’s longstanding relationship with Soderbergh has continued through the years and they have worked together on ten theatrical releases including Kafka, The Limey, Traffic, Solaris, ContagioN, and on the hit Cinemax TV show THE KNICK.

Perhaps it is because of his time in the punk scene that Martinez’s approach to scoring is nontraditional.  His scores tend towards being stark and sparse, utilizing a modern tonal palette to paint the backdrop for films that are often dark, psychological stories like Pump Up the Volume (1990), The Limey (2009) Wonderland (2003), Wicker Park (2004), and Drive (2011).  Martinez has been nominated for a Grammy Award (Steven Soderbergh’s Traffic), a Cesar Award (Xavier Giannoli’s A L’origine), and a Broadcast Film Critics Award (Drive).  Martinez’s recent films include Robert Redford’s The Company You Keep, Nicholas Jarecki’s Arbitrage, and Harmony Korine’s Spring Breakers (co-composed with Skrillex).  His second film with Drive director Nicolas Winding Refn, Only God Forgives, earned Martinez a 2014 Robert Award (Danish Academy Award).