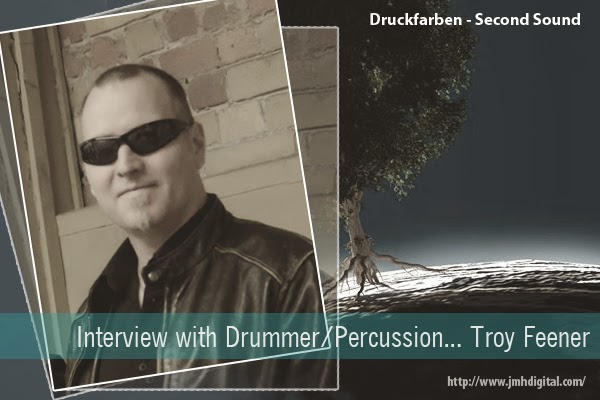 Always giving you more, something cool, something different... I give you a chance to know Troy Feener - Drummer for Druckfarben. I thank him and Anne for getting this together, thank you.
Jeremy [Howlin' Wolf]

Howlin' Wolf: Please tell us who are you, what part do you have within "Druckfarben" and how did you come to be in the group "Druckfarben"?

Troy Feener: Troy here, I am the lead drumming for Druckfarben. In 2007 I was given the opportunity to put together a group to recreate Yes's Close to the Edge and The Yes Album with Phil. I told him my first call for guitar would be Ed. I asked Peter but he was unavailable and Ed brought in Will.

When the show was over we all wanted to continue playing together but it took a few years until we put out our first CD.

Howlin' Wolf: Tell us something you will take away from your release "Second Sound" and how this may differ from previous releases?

Troy Feener: I enjoyed making Second Sound much more than the first DC because I was not playing alone to stem tracks. We had more of a band vibe even though Ed was still the principal writer. Will contributed some ideas and everyone seemed to be in good spirits.

Troy Feener: Not really, I have not contributed to the lyric writing and I think that the lyrics represent more of Ed's world view than my own.

Howlin' Wolf: Share a story that happened on stage, how as a group do you handle the situation?
Troy Feener: We played a gig once where a friend of ours came out and tried to clap along very loudly. At first we were getting upset but eventually all we could do was laugh. The same thing happens when people try to dance to our music, sometimes it can be more entertaining than the band.

Troy Feener: Ya, the Internet works for bands like Druckfarben and non mainstream bands. I would like to believe that the Progressive Rock community knows that in order for indie bands to continue making records that they need real support. Druckerfarben would love to tour Europe but it has not become financially feasible yet.


Troy Feener (Drums, percussion) - Troy Feener was born to play the drums as his estranged father had been a professional drummer until he was 12 years old. After he had the opportunity to use his fathers kit he began lessons and searched out other musicians of similar ability. He attended music college and worked in music stores on the side. A few years later he found himself in a few different bands with Ed and hired Ed in the first gig he aquired as a band leader in an ethiopean restaurant. When their final ensemble dissolved Troy left for the road playing in a top 40 band 6 nights a week all across Canada. The musical education from that time away translated into an gig with Red Rider and Big Faith and Troy continued his touring for several more years with time in Honeymoon Suite, Rik Emmett, Jeff Healey, David Usher,Tom Cochrane and many others. In 2005 He began to play with Classic Albums Live recreating classic recordings from the 60's and 70's. It was here that the foundation for Druckfarben would be laid and as they say the rest is history!
Hosted by Jeremy [Retro] at 12:00 AM