MVD Entertainment Group: Arrow Films (UK) to release Day of Anger, Blind Woman's Curse, and Mark of the Devil in the US

MVD Entertainment Group announces the distribution of Arrow Video in North America with a host of cult titles receiving deluxe treatment in video, audio, supplements and artwork. Arrow's global reputation as one of the finest labels in the world has come about through consistent high quality product and a focus on fan-based products always at its core. This includes a major investment on restoring original material through modern techniques as well as pioneering packaging solutions and newly commissioned artwork for each release.

The launch l kicks-off with North American Blu-ray premieres of Mark of the Devil on March 17th, followed by Blind Woman's Curse on March 24th and Day of Anger on March 31st. 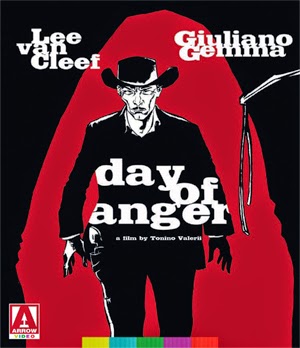 DAY OF ANGER (Blu-ray / DVD):
When Sergio Leone turned Lee Van Cleef into a major star with For a Few Dollars More and The Good, the Bad and the Ugly, the actor sensibly stayed in Italy to make several more spaghetti westerns, including this one from Leone's former assistant Tonino Valerii that genre aficionados rank amongst the best ever made. Giuliano Gemma plays street cleaner Scott Mary, relentlessly bullied by the people of the small town of Clifton. When legendarily ruthless master gunfighter Frank Talby (Van Cleef) rides into town, Scott seizes the opportunity to lift himself out of the gutter, and possibly even surpass Talby's own skills. But what is Talby doing in Clifton in the first place? This lively, intelligent western, notable for the chemistry between its charismatic leads, some memorable action set-pieces (including a rifle duel on horseback that has to be seen to be believed), and a jazzy Riz Ortolani score, is presented here in an exclusive high-definition restoration from the original Techniscope negative.
Info / Assets: http://mvdb2b.com/s/DayOfAngerBluRayDVD/MVD7121BR 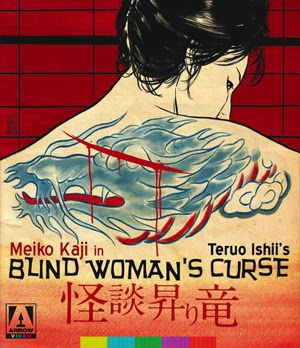 BLIND WOMAN'S CURSE (Blu-ray / DVD):
A thrilling Yakuza film featuring eye-popping visuals, sensational fight sequences and the gorgeous Meiko Kaji (Lady Snowblood, Stray Cat Rock), in her first major role. Akemi (Kaji) is a dragon tattooed leader of the Tachibana Yakuza clan. In a duel with a rival gang Akemi slashes the eyes of an opponent and a black cat appears, to lap the blood from the gushing wound. The cat along with the eye-victim go on to pursue Akemi's gang in revenge, leaving a trail of dead Yakuza girls, their dragon tattoos skinned from their bodies. A bizarre blend of the female Yakuza film and traditional Japanese ghost story, with a strong dash of grotesque-erotica (the same movement was a sensibility of Edogawa Rampo whose works were adapted by Ishii in Horrors of Malformed Men), Blind Woman's Curse is a delirious mash-up of classic genre tropes, of which Ishii was no stranger, having directed everything from Super Giant films to Biker movies!
Info / Assets: http://mvdb2b.com/s/BlindWomansCurseDualFormatBluRayDVD/MVD7120BR 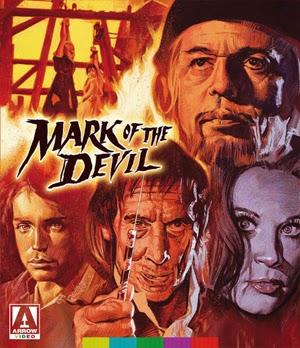 MARK OF THE DEVIL (Blu-ray / DVD):
Once proclaimed as "positively the most horrifying film ever made", Mark of the Devil arrives in a director-approved edition featuring a new restoration of the feature. A bloody and brutal critique of religious corruption, Mark of the Devil sees horror icon Udo Kier (Flesh for Frankenstein, Suspiria) play a witchfinder's apprentice whose faith in his master (Herbert Lom) becomes severely tested when they settle in an Austrian village. Presided over by the sadistic Albino (a memorably nasty turn from Reggie Nalder), the film presents its morality not so much in shades of grey as shades of black. Written and directed by Michael Armstrong, who would later pen Eskimo Nell, The Black Panther and House of the Long Shadows, this classic shocker has lost none of its power over the years.
Info / Assets: http://mvdb2b.com/s/MarkOfTheDevilBluRayDVD/MVD7119BR