A strong schedule of April titles follows suit with MASSACRE GUN (limited to 3k copies) starring genre icon Jo Shishido on the 7th; BLOOD AND BLACK LACE, the Italian classic that would spearhead the giallo genre and provide a prototype for the slasher movie will be available as a Limited Edition Steelbook and on dual format Blu-ray / DVD on the 14th; and finally, THE STRANGE CASE OF DR JEKYLL AND MISS OSBOURNE, Walerian Borowczyk's visually stunning adaptation of Robert Louis Stevenson's much-filmed tale will follow on the 21st.

Arrow's global reputation as one of the finest labels in the world has come about through consistent high quality product and a focus on fan-based products always at its core. This includes a major investment on restoring original material through modern techniques as well as pioneering packaging solutions and newly commissioned artwork for each release. 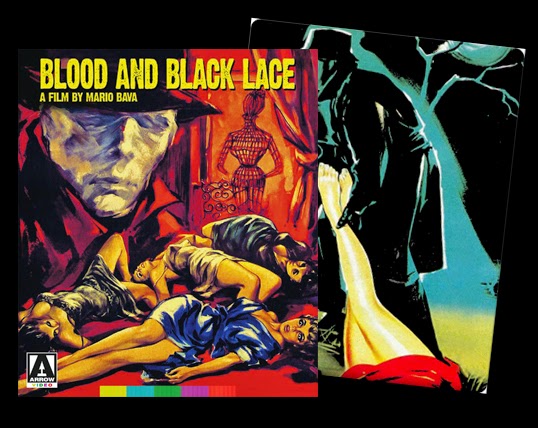 BLOOD AND BLACK LACE (Blu-ray / DVD) and
LIMITED EDITION STEELBOOK:
The Cristiana Haute Couture fashion house is a home to models... and backstabbing... and blackmail... and drug deals... and now MURDER. Having established a template for the giallo with The Girl Who Knew Too Much, Mario Bava set about cementing its rules with Blood and Black Lace. In doing so he created one of the most influential films ever made - an Italian classic that would spearhead the giallo genre, provide a prototype for the slasher movie, and have a huge effect on filmmakers as diverse as Dario Argento and Martin Scorsese. Newly restored from the original camera negative and presented here in its original, uncut Italian form, this dual-format release allows fans to see Blood and Black Lace afresh and offers newcomers the ideal introduction to a major piece of cult filmmaking.. 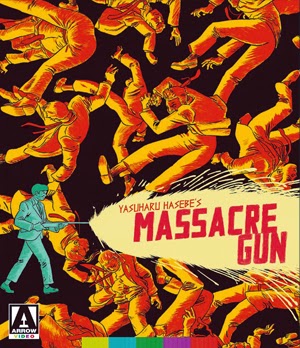 MASSACRE GUN (Blu-ray / DVD):
Genre icon Jo Shishido stars in this tense and violent yakuza yarn from genre stalwart and Seijun Suzuki's former assistant, Yasuharu Hasebe (Female Prisoner Scorpion: #701's Grudge Song). Shishido stars as Kuroda, a mob hitman who turns on his employers after being forced to execute his lover. Joining forces with his similarly wronged brothers, hot-headed Eiji (Tatsuya Fuji, In the Realm of the Senses) and aspiring boxer SaburÃ´ (JirÃ´ Okazaki, Stray Cat Rock: Sex Hunter), the trio escalate their mob retaliation to all-out turf war where no one will stop until one faction emerges victorious. Strikingly violent for the period and gorgeously photographed in monochrome like genre siblings Branded to Kill and A Colt is My Passport (Shishido's other films from 1967), Massacre Gun is a bold iteration on the genre featuring some stunning compositions and the assured direction of Hasebe.
Info / Assets: http://mvdb2b.com/s/MassacreGunDualFormatBluRayDVD/MVD7205BR 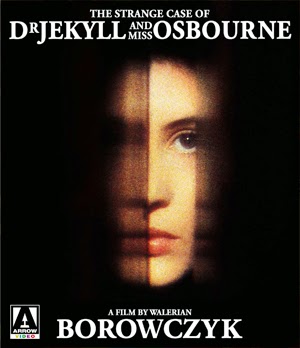 THE STRANGE CASE OF DR JEKYLL AND MISS OSBOURNE (Blu-ray / DVD):
"Potent and poetic, mischievous and macabre, Borowczyk's film shows how many imaginative worlds the horror movie can open up when the right artist holds the keys" (Nigel Andrews, Financial Times) It's the engagement party for brilliant young Dr Henry Jekyll (Udo Kier) and his fiancÃ©e, the beautiful Fanny Osbourne (Marina Pierro), attended by various pillars of Victorian society, including the astonishing Patrick Magee in one of his final roles. But when people are found raped and murdered outside and ultimately inside the house, it becomes clear that a madman has broken in to disrupt the festivities - but who is he? And why does Dr Jekyll keep sneaking off to his laboratory? We know the answer, of course, but Walerian Borowczyk's visually stunning adaptation of Robert Louis Stevenson's much-filmed tale is crammed with wildly imaginative and outrageously perverse touches characteristic of the man who scandalised audiences with Immoral Tales and The Beast, not least the explicitly sexualised nature of Mr Hyde's primal urges.
Info / Assets http://mvdb2b.com/s/StrangeCaseOfDrJekyllAndMissOsbourneTheDualFormatBluRayDVD/MVD7208BR

Part II to an all ready cool bunch of films... this is just the start!
Jeremy [Howlin' Wolf]
Hosted by Jeremy [Retro] at 12:00 AM