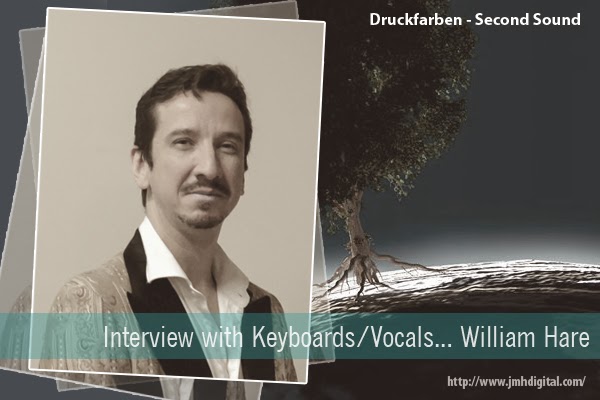 Always giving you more, something cool, something different... I give you a chance to know William Hare - Keyboards for Druckfarben. I thank him and Anne for getting this together, thank you.
Jeremy [Howlin' Wolf]

Howlin' Wolf: Please tell us who are you,  what part do you have within "Druckfarben"


William Hare: I am William Hare and I play keyboards with Druckfarben as well as contributing to the composition of our music.  I’ve been with the band since its inception (as all of us have) in 2008.  Troy Feener and Ed Bernard had known each other since high school and Ed invited me to participate in a performance of “Close to the Edge” and “The Yes Album” in September of 2007 (a presentation of Classic Albums Live).  Phil Naro was on lead vocals that night.  Really, it was that performance that led to the creation of Druckfarben soon after.

Howlin' Wolf: Tell us something you will take away from your release "Second Sound" and how this may differ from previous releases?

William Hare: Personally, I feel a need to continue to contribute more and more to the song writing with each new album.  I contributed more on this album than on the last and hope to do so  for the next album.   I also feel that we need to continue to record as a band.  The first album was mainly done with each of us providing our parts in isolation – None of us really played together at the same time.  The second album moved away from that towards more “live off the floor” performances and I think the album was better for that.  We need to continue down that path.

William Hare: Not exactly.  I feel a close connection to “Long Walk Down” and the first movement of the “Second Sound” suite since those were pieces I had brought to the album that I was very pleased were embraced by the band.  They aren’t really about me but they came from me so I definitely feel that connection.

Howlin' Wolf: Share a story that happened on stage, how as a group do you handle the situation?

William Hare: Hmmmm.  The only thing that comes to mind involves me personally and is with Peter and Troy on stage.  We were performing the first movement of “Tarkus” (this was back when we played covers) and I was playing the opening ostinato on the piano.  When I went to play the Hammond B3, I realized that it had shut down on me.  I kept the ostinato going, Troy and Peter kept playing it over and over while I fiddled with the Hammond trying to get it going.  Finally I dialed up an organ sound on one of my other keyboards and we were able to get the song going.  Stopping the song and starting over is never a good idea – Always best to plow ahead.

William Hare: You-Tube is definitely a great way for bands develop a presence – Internationally, really.  The internet in general has been great for a band like ours since we haven’t been able to tour so far.  You-Tube at least gives our fans in Europe a chance to see what we do on stage.  Definitely a positive thing.

William Hare (Keyboards, vocals): Will Hare started his classical training at age eight. From a young age, he had a strong affinity for Bach and Rachmaninoff, and minimalists like Phillip Glass. As he developed into a career musician, he performed with various original artists in genres ranging from country to adult contemporary, classic rock to dance. These included country artist Crystal Shawanda and Canadian chart-toppers from the 70s, Abraham's Children.

Will met Ed Bernard while working with opera singer Angelica Decastro. Since2005, Will has been busy on the tribute circuit, covering the likes of Billy Joel, Elton John, Roy Orbison, Beach Boys, Tina Turner, Santana, Rod Stewart, Eurythmics and many others. He has also been a top-call keyboardist with Classic Albums Live, recreating over 20 legendary albums. Will has been teaching piano for the past 12 years.
Hosted by Jeremy [Retro] at 12:00 AM