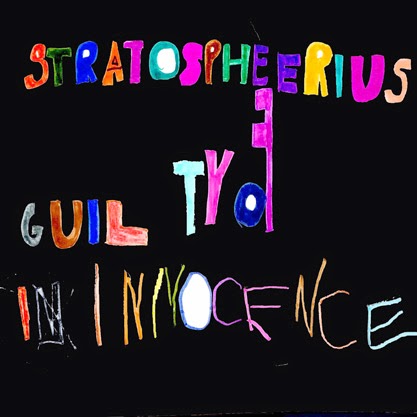 Joe Deninzon & Stratospheerius are releasing four singles throughout 2015, culminating in a full-length album in 2016. The songs will be available for downloads (CDBABY, Amazon, BANDCAMP, iTunes) and streaming (SPOTIFY, Reverbnation…) and anywhere that mp3’s are in orbit. The songs are performed and produced by Stratospheerius, and engineered and mastered by Rave Tesar (Renaissance), mixed by Alex Salzman. The first single was “Behind the Curtain” which LET IT ROCK’S Dmitry Epstein writes “Deninzon sings, yet the only magic to happen here comes from his strings attack when Joe loosens it all to get into the eye of the hurricane where the calm reigns. There’s madness, too, but one you would like to be in sometimes – if only for the attention it draws. Step in the zone, the.” Behind the Curtain was also picked up in China for mobile phone distribution.

The next song will be released by Valentine's Day (February 14) and is called "Guilty of Innocence." Joe says it was “inspired by my 2012 stint in jury duty and deals with crime and punishment. I was presiding on a rape trial and the guy who I thought was guilty got off practically scot-free. Listen to “Guilty of Innocence” at http://stratospheerius.bandcamp.com/

“We are all guilty of innocence
We are all blissful with ignorance
We're planting doubt with a weak defense
Run to the hills and jump the fence
…. We're all in handcuffs theoretically
A room full of people in solitary

Awards in the Cornucopia Festival, and was named "Best Jam Band" in Musician's Atlas Independent Music Awards. The band has recently been profiled in both PROGRESSION (the Bible of progressive rock) and DOWNBEAT ONLINE. BLOGCRITICS compares Deninzon to "Jeff Beck (as a) "fiddlemaster with a streak of humor."
Just Announced and I am a day late... and a dollar short!
Jeremy [Howlin' Wolf]
Hosted by Jeremy [Retro] at 1:48 PM