Making all of your nightmares come true … Varèse Sarabande will be releasing A NIGHTMARE ON ELM STREET 8-CD box set (limited 2000 units) on October 16, 2015. This deluxe package contains all 8 soundtracks from the original series, over 8 hours of music including almost 3 hours of bonus tracks! New artwork has been commissioned for the set (by artist Shawn Conn, http://atomicdeadguy.com/), and configuring the sleeves together forms a larger piece of art. Before you have any nightmares, please don’t worry … the original Matthew Joseph Peak creations are included in the packaging. The set comes complete with the trademark knitted Freddy sweater encasing the outer box! 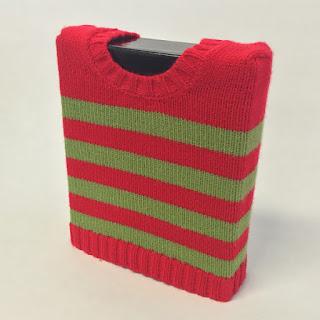 Also included in this set is a suite from the video game featured in the film Freddy’s Dead: The Final Nightmare and the theme from Henry Manfredini’s FRIDAY THE 13TH series, as heard in the film FREDDY VS. JASON (with performances by the band Machine Head).

Pre-orders for the Varèse Sarabande A NIGHTMARE ON ELM STREET limited edition 8-CD box set will be taken beginning Friday, September 18 at www.varesesarabande.com. The boxed set will ship on October 16, 2015
Yes, PLEASE!
Jeremy [The Wolf]
Hosted by Jeremy [Retro] at 4:48 AM