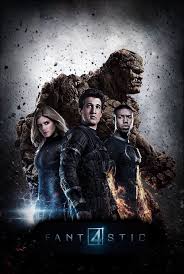 So everyone seems to hate the new FANTASTIC 4 movie. But why?  Its not a bad film at all.  Read my review here. I didn't think it was going to be any good either but I went and saw it out of morbid curiosity and gosh dang it I liked it.  I think it is unfair how maligned the film has been received. Nobody went and saw it yet everyone talks about how bad it is.  The professional critics have been extremely negative but when have they had any integrity?  So what is the deal?  Why all the hate?  I figure I would use this post to try explain the poor performance and hostility toward the FANTASTIC 4.  I don't think it has anything to do with all the supposed behind the scenes troubles.  All productions have problems. I could be wrong but I do believe that those stories didn't come out or become big until the early word was that the film fantastically sucked.  The studio had already announced a date for the sequel indicating FOX had high hopes for the franchise.

The Fantastic 4 franchise maybe big in the old days in the comic book format but nowadays the mainstream audience probably doesn't even know what a Fantastic 4 is.  The Marvel Cinematic Universe started off strong by casting Robert Downing Jr. as Iron Man.  His appeal spreads across two major demographics in the mainstream audience.  I am not talking about fans of comics or movie fans.  I am talking about average movie goers that simply want entertainment.  He is sexy for the ladies and funny for the guys.  Chris Evans as Captain America is sexy for the ladies and an action hero for the guys.  The same can be said for the male leads in THOR and GUARDIANS OF THE GALAXY.  THE HULK doesn't have a sexy funny lead and that movie didn't do so well.  Its a shame really.  Now look at the new FANTASTIC 4.  Miles Teller is not the macho sexy funny actor with the broad mainstream appeal.  He is an excellent actor and despite his youth is the right choice for Reed Richards.  He got snubbed for an Oscar nomination for WHIPLASH which is an excellent film by the way.  Also in today's world the powers of the Fantastic 4 may not be as appealing.  Having the powers of a Stretch Armstrong seems a little silly.  Being able to turn invisible or flaming into a human torch and being able to fly is kid stuff compared to today's more deadly heroes.  The Thing is another name for Hulk as far as mainstream audiences are concerned.  CLICK HERE TO READ THE REST...