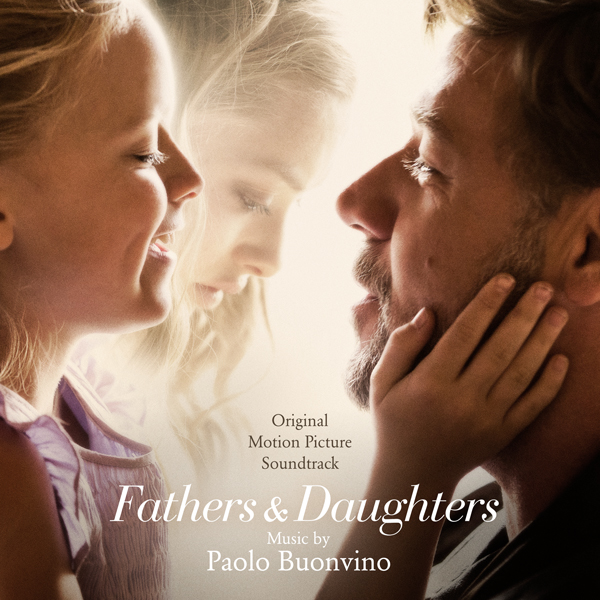 Lakeshore Records will release the FATHERS & DAUGHTERS – Original Motion Picture Soundtrack digitally on October 23, 2015. The album features original music by Paulo Buonvino (L’Ultimo Bacio) with two exclusive tracks performed by Michael Bolton, a cover of the classic song “(They Long To Be) Close To You” and the original track “Fathers and Daughters”.

“I have made several movies with Gabriele [Muccino, director] and we know each other very well,” said Bounvino.  “I know exactly what he means with a simple gesture, we developed a common language that helps us to work together and understand what we need and what we want. That ease shows through in the effecting emotions on the screen. It is a pleasure to such a wonderful relationship that allow for and produces great work.”

Paolo Buonvino is one of the most respected film composers in Italy. During his carrier he won some of the most prestigious awards such as the David di Donatello, il Nastro d’Argento and the Premio Nino Rota at the International Venice Film Festival. A composer and musician with a classical background, Paolo Buonvino’s music is very communicative and combines different styles, suitable for presentation by any and all large scale orchestras.

Buonvino is one of the most requested composers because of his versatile and charming musical style and his capability to highlight the development of the story. Paolo is internationally known for the score of the movie L’Ultimo Bacio winner of the 2002 Sundance Film Festival – Audience Award. Working since he was young, Paolo Buonvino has realized more then 50 original scores for futures films, 14 TV movies and he has collaborate with such incredible directors like Gabriele Muccino, Giovanni Veronesi, Paolo Virzì, Carlo Verdone, Roberto Faenza, Joan Carr-Wiggin, Diane Kurys and many more. He also wrote and arranged beautiful works preformed by Giuliano Sangiorgi, Elisa, Jovanotti, Franco Battiato and Dolores O’Riordan. Born in Sicily, Paolo now lives in Rome where he composes most of his music and often works as a music conductor for symphony orchestra.

FATHERS & DAUGHTERS is a love story between a father and daughter who live in Manhattan 25 years apart. The story moves back and forth between the 1980s where a famous novelist and widower struggles with mental illness as he tries to raise his 5-year old daughter; then it shows that daughter as a 30-year old woman in contemporary Gotham who battles her own demons that stem from that turbulent childhood.

“The entire movie takes place in two different timelines,” said Buonvino. “When Katie is a child, I approached the score in a more classical way of writing – you can hear that in the track ‘Father and Daughter’ used for the scene with the bicycle. For the adult scenes where she deals with the illness of her father (Russell Crowe) I used a combination of electronic music, the orchestra and a solo violin. The solo violin plays some harmonics.”