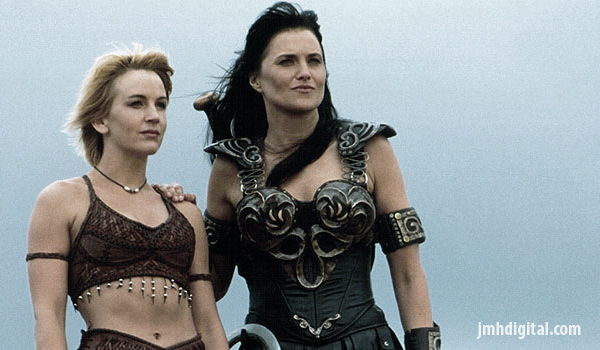 During the pre-order period, from November 4-18, any fan who orders the set on the Varèse Sarabande website will receive a limited edition XENA Fanified Poster featuring their name and all of the other “Xenites” printed on the background of the image.  The poster will be hand-signed by LoDuca.

“The reissue of my music for Xena gives me a moment to reflect on an incredible period for all of us lucky enough to have worked on the series; actors, writers directors, and producers alike,” said LoDuca. “At the top of my Thank Yous are Rob Tapert, who made it all happen, and the amazing Lucy Lawless. No one but the two of them could have it pulled off with such strength, grace and creativity. Xena garnered legions of fans, and it also helped to inspire a generation of confident young women.”

“His [LoDuca’s] music was very much a part of the storytelling,” said Sears.  “It enhanced and supported the themes of our series.  It lingered in the atmosphere, seemingly unnoticed, as it subtly played on the emotions of our audience.  And, when needed, it pounced on comments, bringing them to life with an intensity that no amount of action or dialogue could ever convey.”

In ancient Greece, Xena, a mighty female warrior, once led an army of outlaws that terrorized the lands and was an enemy of the hero Hercules. Regretting her past crimes, Xena is now on a quest for redemption. Accompanied by her friend Gabrielle, Xena travels across the lands doing good and fighting evil forces.

“For me the journey was epic,” said LoDuca.  “Heroic poems one week; screwball comedies the next. Throw in an operetta and a rock musical; voyages to exotic lands. Invent musical cultures that never existed.  It also marked the beginning of collaborations with colleagues and friends that continue to this day. Thank you Xena, and thank you fans for letting us entertain you.”

Joseph LoDuca’s life-long love affair with music began with deep rock and jazz roots coming up through the rich music scene in the Motor City; to university studies of composition and guitar in New York; expanding further to absorb the musical languages of the Middle East, India, and Asia, finding fresh contexts for ancient sounds.

He began his film career scoring director Sam Raimi’s Evil Dead Trilogy, and has continued that relationship through the top-rated television series Spartacus, Hercules: The Legendary Journeys, and Emmy winners The Legend of the Seeker and Xena: Warrior Princess.

Pre-orders for the XENA WARRIOR PRINCESS: 20TH ANNIVERSARY ANTHOLOGY box set will be taken at https://www.varesesarabande.com/products/xena-warrior-princess-20th-anniversary-anthology from November 4-18.
Just Announced, features some top-notch music and song!
Jeremy [The Wolf]
Hosted by Jeremy [Retro] at 8:03 PM