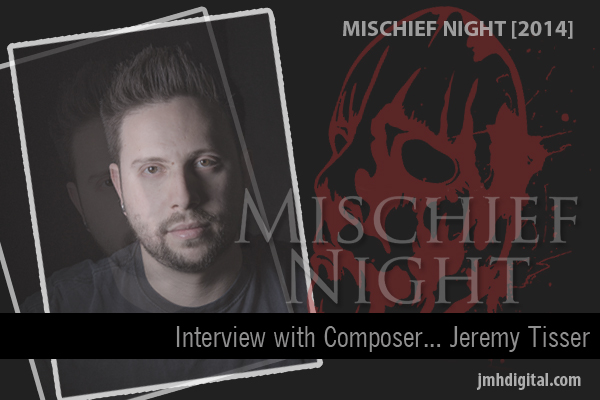 Being able to talk with cool people, is one of the main reasons why we are here... if not for the label HOWLIN' WOLF RECORDS, I get to share a great composer "Jeremy Tisser". So please welcome him and enjoy this journey into the world of music from Jeremy's view. THANK YOU to all who helped pull this together from Ashley to Jeremy himself, once again cool people...
Jeremy [The Wolf]

Jeremy [The Wolf]: What are some of the things you have learned in the business of composing and whom are some of those you have worked with up to this point?

Jeremy Tisser: In the few short years it’s been since I graduated from USC, I’ve learned quite a bit about the business.  We come out of school expecting to jump into this cutthroat industry, but the reality is that it takes years. You spend time honing your craft, as well as working on the business. The industry is no longer only about the music. With the advancements of technology, a composer also has to learn to essentially become a “computer technician”. My setup involves a main computer which hosts my main writing software, a sample machine which hosts all of my orchestral digital instruments (referred to as Sample Libraries), and a second Mac Pro with is used only for Pro Tools. I use a MIDI keyboard to play the instruments of my sample libraries into my writing software, and the audio is sent from that machine through various interfaces and into my Pro Tools machine. The audio is divided up in Pro Tools into what are called Audio Stems, or the different pieces of the mix. An example of the stems can be Orchestra, High Percussion, Low Percussion, Guitars, Keyboards, Choir, High Synth, and Low Synth. When you combine these tracks and play them simultaneously, you hear what is the Final Mix of each cue. It’s really quite fascinating!

I began my career working with composers Mark Watters and Frederik Wiedmann. My job with Freddie was more of a technical assistant job, though there were plenty of times I could be hands on with the music by acting as the copyist (creating the musician’s parts for recording sessions). With Mark, it was more of a musical job. Often with Mark, I was orchestrated, or preparing scores, or transferring his mockups into sheet notation for Mark to orchestrate, and even writing additional music.

Jeremy [The Wolf]: Where do you see yourself in say one year... five years and do you find not planning the next move more intriguing?

Jeremy Tisser: This is always an intriguing question to me. I always like to set goals for myself, but you never really know what projects will come from where. It almost makes the idea of not planning to be more exciting.  I have to love the projects I work on in order to be inspired, and that passion always seems to lead to more interesting projects, be it in film, television, or video games. So the best answer I can give is that wherever this path takes me is where I’m going to go.

Jeremy [The Wolf]: Who do you consider to be influences, who do you listen to for inspiration?

Jeremy Tisser: My biggest influences would be John Powell, Jerry Goldsmith, John Willams, and Thomas Newman. To me, these are the top story tellers in the field of composing for film and television. Every project has a story and a purpose, and with these composers I’ve just mentioned, they made a point to not only tell the right story for each film, but to individualize every project they do. Each film has its own soul and is unique in its own way, and the music should reflect that. With every project I work on, I try to approach the score with a fresh set of ears and eyes. I don’t want to be influenced by my own work. Every project has something new and unique to offer the world, and to me the music should be approached in a similar method.

When I’m in between projects, I tend to try and stay away from film music as much as I can. I mean I do enjoy listening to film music just for the music, but in general I enjoy Michael Jackson, Tower of Power, Thrice, Deftones, Dream Theater, etc. It is a chance for me to get away from the film world and essentially “clean my palate,” if you will. When I’m on a project, really I just listen to anything and everything. I love to study the classics like Ravel and Stravinsky, but I also do enjoy listening to music of current and past films. Like I mentioned earlier, every film is unique and tells its own story, and every composer who has made it has something to offer the world. We shouldn’t take that for granted, and make sure to enjoy what it is these people have given us.

Jeremy [The Wolf]: Do you prefer game or film score music more of a challenge and do you like that game music has come a long way in a short time?

Jeremy Tisser: I think both film and game music are challenging in their own way. With films, you are locked to picture. Everything that you write has to reflect what is on the screen, and if it doesn’t work it must be changed or taken out. With games, the music still has to reflect what’s happening on screen, but you are not locked to any specific timings necessarily – at least not the same way as in films.  There might be a 30 second build-up, for example, but you don’t have to sync to a specific hit or cut. The challenge of game music for me is figuring out how to make a piece of music loop without sounding repetitive or dull.

I love how far game music has come, especially with in-game cinematics. In today’s gaming world, the sky is the limit on what is or is not possible. We are no longer limited by technology with regards to music creation. You can write completely dynamic music, and the implementation allows for the music to change and evolve with the player as the game progresses.  I’m working on a virtual reality game right now where during the action sequences, new cues and themes are introduced when a new enemy shows up. The trick is that the music still has to flow and make sense together. In addition to alternate cues being phased in this way, there are also musical layers that can be added or removed based on the games intensity, the enemy distance, or even potentially the weapon choice. There is so much that can be done in games that it really inspires a whole new set of skills that was never even an option in other mediums, or even earlier games.

For More Information:
http://jeremynathantisser.com/
Hosted by Jeremy [Retro] at 1:00 AM