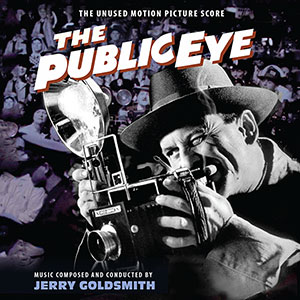 Intrada announces the premiere release of Jerry Goldsmith's unused score to The Public Eye. For many years it wasn't certain whether the score had been recorded, but after confirmation from recording engineer Mike Ross-Trevor, the recording was tracked down and is presented here for the first time. In his Blu-ray commentary, Howard Franklin says he was thrilled to secure the services of Jerry Goldsmith. “It was like the greatest coup ever,” he said. And yet when the score was recorded, Franklin was disappointed in the dearth of themes and the repetitive nature of the score that did not fit his vision, so he went in a different direction.

A sense of unease—cloaked in a smoky, suggestive jazz vibe—pervades much of the unused score. Goldsmith achieves this through the use of short motifs, an avoidance of long-lined melody, and an absence of complex harmony that together create a feeling of stasis throughout. Gluing it together are two simple motifs that appear in virtually every cue and act as idées-fixes. In this sense, Goldsmith seems to have taken a page from his colleague Bernard Herrmann, who was particularly known (especially in his later scores) for using similar techniques.

Intrada is thrilled to make this previously unheralded music—in crisp, clear stereo sourced from the digital masters recorded by Mike Ross-Trevor in London—available to listeners for the first time, and to close yet another gap in the discography of this amazing film music legend.

The Public Eye opens with a demonstration of photojournalist Leon “Bernzy” Bernstein's operating methods, such as grabbing photos of a murder victim before the cops arrive and resorting to other devious tricks to get pictures and be the first to offer them for sale. He is surprised when Kay Levitz (Barbara Hershey), the owner of a posh local club, asks him to investigate Emilio Portofino (David Gianoupuolos), a mobster who has laid claim to her late husband’s stake in the club. But when Bernzy finds Portofino lying in a pool of blood, he immediately becomes a suspect in the gangster’s murder. And things get more complicated for Bernzy from there.