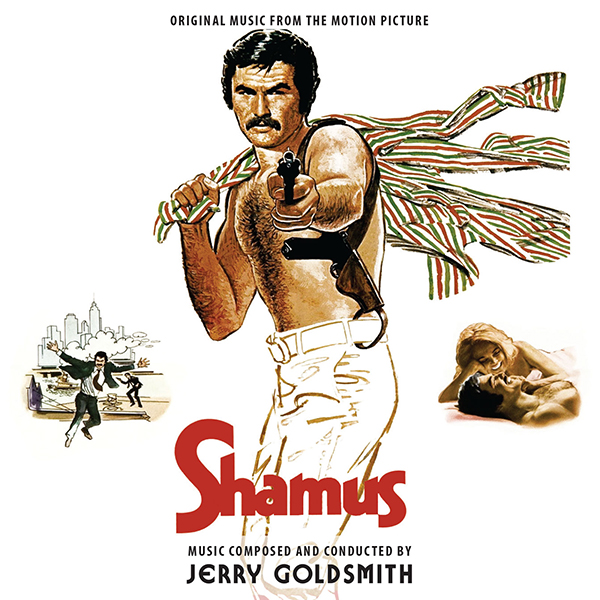 Intrada announces another rare find – the complete score to Jerry Goldsmith's much-sought score to the 1973 Burt Reynolds film Shamus. Long thought lost, what was once lost is now found! Goldsmith took a funky approach, using Reynolds’ relaxed performance as his touchstone, infusing the score with a '70s vibe. Goldsmith's main theme is a droll, jazzy melody, first heard on the piano, that is the ideal musical match for Reynolds’ refreshingly off-hand performance. But the sparse score has moments that burst into action in true Goldsmith fashion.

The score was praised in the press, catching the attention of at least two critics hailing his hip, contemporary score, as well as how it added to the entertainment value of the film. Fans would argue that is the case for all of Goldsmith's works. Fans will also relish the crisp, detailed sound of this recording, allowing all the instruments to shine in this long, long overdue soundtrack release.

In the film, The “Shamus” of the title is McCoy, a low-rent private eye who lives in a barely furnished Brooklyn apartment and hustles pool to help make ends meet. After a jewel heist leads to the thief’s brutal murder, millionaire E.J. Hume hires McCoy to track down the stolen diamonds, though the client admits that McCoy was his “fifty-third choice” for the assignment. The trail of the gems leads to Felix Montaigne, a former football star with a shady shipping business and a beautiful sister who strikes McCoy’s fancy. After an investigation full of double crosses, violent confrontations and narrow escapes, McCoy finds himself without a client but with a new love in his life.