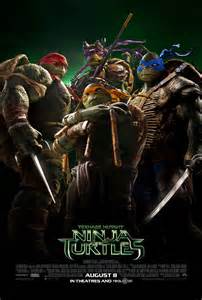 What a lazy and horrible title for this post, isn't it?  You probably clicked on this post just to mock the writer of such a title and you would be right to do so.  But let me ask you this.  Does the new TMNT movie deserve a better effort?  I think not.  What a way to mess up a potentially terrific franchise from the start!  You would think that a movie about teenage mutant ninja turtles would be full of originality and with today's special effects the look of our heroes in a half shell can finally be made to look right.  Nope!  This movie is a rehash of what we have already seen before which is fine to establish key elements of the Turtles but then you realize that you have seen all of this in recent movies from the past few years as well.  Heroes in a half shell?  More like heroes in a half-assed story.

I am going to get real stupid when describing the plot so bear with me on this one.  I want to show how stupid the story is by being stupid myself.  So  a rich guy and a ninja watched THE AMAZING SPIDER-MAN and THE TRANSFORMERS and decided to be bad guys and put a thing on top of a building that makes a poison cloud to poison the city for the sole purpose of being rulers of the world and really really rich.  They are already rich but whatever.  Don't pay attention to that part of the story.  Teenage mutant ninja turtles show up and stop them.  There are some hijinks that happen along the way, some weirdo shows up in what looks like an inflatable Whoopi Goldberg costume but very little in the way of real character development or bonding occurs.  We the audience are never drawn into the story.  Maybe we are amused by the colorful special effects and flashy camera work or distracted by the haphazardly strewn random shots of movement that make up most of the poorly staged fight sequences.  In any case it looks like a wreck..
CLICK HERE TO READ THE REST....