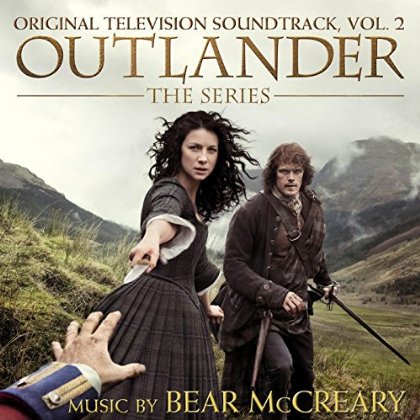 Madison Gate Records announces the release of “Outlander: Original Television Soundtrack, Vol. 2” on CD and digital formats on September 25, 2015. Fans can pre-order the album on iTunes and Amazon and receive an instant download of an exclusive, all-new extended version of the series main title theme, “The Skye Boat Song.” The exclusive full-length track was adapted and produced by Emmy® Award-Winning Composer Bear McCreary and features vocal performances by Raya Yarbrough.

The soundtrack contains original music and period-accurate song adaptations by McCreary from across season one of the Outlander television series, with a focus on the last eight episodes. In response to demand from fans, the album also includes “Wool Waulking Songs” – a pair of traditional folk songs performed on camera, a cappella, by Outlander cast members. In addition, the album features a new folk recording by renowned Gaelic singer Gillebrìde MacMillan.

“Having grown up immersed in Scottish folk music, in particular the folk songs of the Jacobite era, I’ve often reflected that Outlander might be the score I was born to compose,” says composer McCreary.

“With the release of the second volume of the first season soundtrack, I’m thrilled that fans can finally experience the score from the entire first season in an album format. I think of these two albums as two halves of a coherent musical whole. Themes introduced in the first are developed and matured in the second. I am especially excited to present the full-length version of ‘The Skye Boat Song,’ which I produced along with vocalist Raya Yarbrough, specifically for this album.”

“I am so grateful that my life journey led me to this remarkable opportunity to channel my passion for this beautiful music into a narrative score to a gripping drama.”

The television series is currently distributed in more than 150 territories around the world. The critically acclaimed first season of the global phenomenon Outlander finished its run in May as the #1 current series among total viewers on Starz in the US, and has been lauded as “a nearly perfect season” (Wall Street Journal) and “the most fearless show on TV” (Zap2It), with critics and fans alike calling the series Emmy-worthy, noting “the acting and writing were all around stunning” (E!). The second season of Outlander is currently in production in Scotland and will debut on Starz in 2016. The hit series has been adapted for the screen by Ronald D. Moore from the best-selling book series by Diana Gabaldon. The series has sold over 26 million copies, with all eight novels appearing on the New York Times best-sellers list.