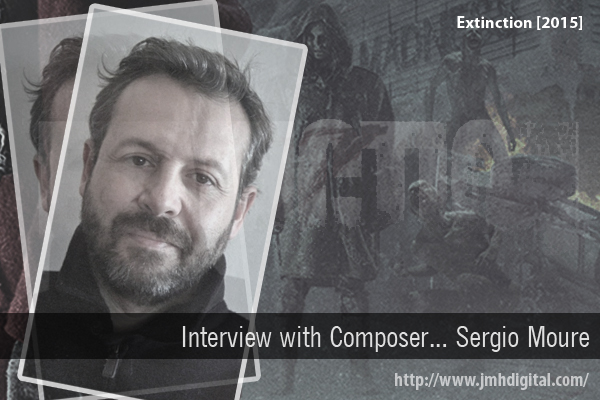 Jeremy [The Wolf]: With a score like "Extinction" did you get the creative control and how did you choose the direction the score took?
Sergio Moure: I always like to get involved creatively in the projects I take and one of the ways that I have to do it is by reading the script very carefully, take notes and then write a theme with the first ideas that come to my mind .. At that early stage of the project I also start defining the type of orchestration and musical ensemble that I will use for the score.

The director of Extinction (Miguel Angel Vivas) always leaves me a lot of creative freedom. He tells me the emotional direction he wants for the film and then I work to give that the emotional tone to the score following that direction.
The score for Extinction has many emotional layers, not only strictly genre or horror, but the dramatic relationship between the characters and the inner world of the child, and that had to be reflected.

Jeremy [The Wolf]: What is one of the better memories while working on this film "Extinction" and or something you will take away from this project?

Sergio Moure: In the case of Extinction I could not attend to the shooting which is one thing that always helps me a lot. But the whole creation process and the long conversations with the director talking about the film and movies in general are a great memory for me.  The experience of the recording of the score in the city of Córdoba with its wonderful orchestra is also a great memory.

Jeremy [The Wolf]: If it came to being the end of the world or the final days... what would you like to do with the time you had left?

Sergio Moure: I would go with my family to an isolated place with sea.

Jeremy [The Wolf]: Can you tell us what is your next project and how it might compare to "Extinction" musically?

Sergio Moure: My next project is a movie called "Dirty Wolves", directed by Simon Casal and it deals with the Nazi occupation of the Spanish tungsten mines during the Second World War and after the Spanish civil war. It is a dramatic story about survival with strong emotional force. The music is comparable to Extinction in the sense of having to describe extreme situations with characters that have to survive and thrive in harsh conditions. But it lacks the horror element as it is not a genre film.
To find out more on the score "Extinction" released on Varese Sarabande, please "CLICK HERE" and I wanted to thank composer Sergio Moure for such a great chat. I hope for a world of more success and continued joys in many more scores/soundtracks.