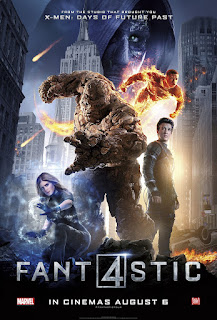 I remember seeing the trailer for the new FANTASTIC 4.  I couldn't help but laugh.  It didn't take a crystal ball to know that this movie was going to fail. And fail it did!  The trailer depicted a bland colorless film that was going to use the tired old superhero movie formula of telling an origin story but confining the comic book element to a realistic Christopher Nolan approach with our heroes finally appearing in costume in the final act when the movie is over.  There was nothing new here.  It was also obvious that this movie was made just so Fox Studios could keep the movie rights to the FF franchise.  Worse yet there was an embargo on reviews for the film before opening day.  Were any of us surprised?  Of course when the embargo lifted all the reviews were negative. Despite all of this I had a strange desire to see it.  So I did.....and....I....liked it.  WHAT?!!!

FANT4STIC(?) tells the origin story of the Fantastic 4.  That is a good idea to start off a franchise......if it was the year 1999!  When it comes to comic book movies we no longer need to spend an entire movie telling a story we already know the ending to.  We have had two Spider-Man origin movies as well as a Ghostrider origin, a Green Lantern origin, Wolverine had one, Superman and Batman both had one Punisher too.  Enough already.  Nowadays it is extremely painful to sit through a trailer for an origin story let alone an entire movie.  That is the first big problem with this movie.  Oh, yea I said I liked this movie.  Maybe I should start with the positives.

critics ruined it, i didn't want to see it... now i want to really see the level that they crushed, cursed and condemned the FF. I like the score, I like how the THING looks... the trailer didn't hold my attention in the first place, that was my death card to not wanting to see it. i like bad movies when you know that is what they want you to see, it's when big budgeted films like this are made bad...

though i like your idea, save us from the origins... move onto the story... give us the Rocky montage in 5 minutes... we are smart, we can follow along...