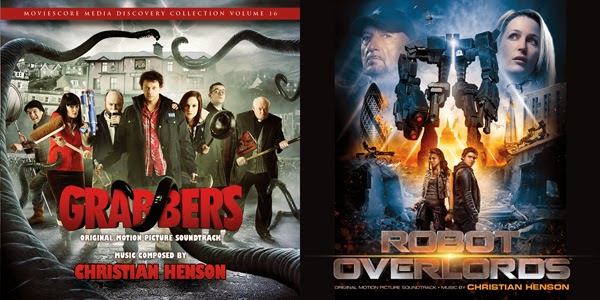 The score is a hybrid of electronic and orchestral elements, written from the perspective of the child protagonists. The music dares to be bombastic and overpowering, or as the composer put it, he wrote what sounds true for those kids who grew up under the robot yoke. As Henson explains: “A lot of modern action scores today are descriptive by merely creating a musical impression of what is onscreen. We tried to populate the score with 'the truth' for all the players - this means when we are scary, we’re impossibly horrific. When we’re tragic, all is is lost. And when we’re heroic, we’re totally shameless. And like all kids,we had the ability to turn our emotions on a six-pence in the moment."

The second release next to Robot Overlords is Grabbers, a 2012 alien invasion film set on a small island off the coasts of Ireland. Starring Richard Coyle, Ruth Bradley and Russell Tovey, the action/horror/comedy starts out like any good alien invasion film with blood-thirsty, sea-dwelling aliens arriving to Erin Island. Their path of terror is marked by whale carcasses and mysterious disappearances, but a full-on attack is thwarted by an unlikely escape route to our heroes. The aliens can’t tolerate alcohol, so as long as the residents of the island can fend off the invaders while they’re drunk enough, they may have a chance of survival. 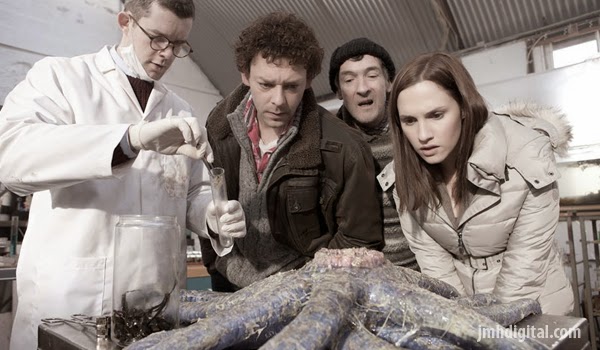 The music from the previous Wright/Henson collaboration, Grabbers is released as part of MovieScore Media’s Discovery Collection. Just like Robot Overlords, the music for Grabbers follows the "bigger is better approach" with bombastic action cues and picturesque faux-Celtic music playing an ode to the composer’s own childhood memories. As he recalls: “This score is dedicated to my father and the Saturday afternoons we spent together watching all of those great movies of the 70’s, an homage to my entire childhood film heritage. This score leaped off the page on first reading. It struck me that an immersive, thematic line was needed to help the viewer escape into the movie like the good ol’ days was what was required. We needed a shameless celebration of movie music and the sheer enjoyment of cinema.” Both score were recorded at Air Studios, London.

Christian Henson is a UK based BAFTA and Ivor Novello nominated composer. Ever since setting up his first West London recording facility to work with best of London underground music scene (such as The Freestylers or LTJ Bukem), Christian wrote music to some 45 films, including his recent credits like the heart-wrenching French holocaust epic La Rafle (2010), the conclusion to the Poirot franchise (2009-13) and the hit video game Alien Isolation (2013), co-written with The Flight. His previous releases with MovieScore Media include Gabor Csupó's fantasy The Secret of Moonacre (2008), Simon Fellows’ modern day Lewis Carroll adaptation Malice in Wonderland (2009), the seabound thriller Triangle (2009), the Medieval horror Black Death (2010), the military thriller Storage 24 (2012) and the television version of Sinbad (2012).
Just Announced: I am a huge fan of composer Christian Henson work, looking forward to discovering something great... from the latest works on MovieScore Media!
Jeremy [Howlin' Wolf]
Hosted by Jeremy [Retro] at 12:00 AM