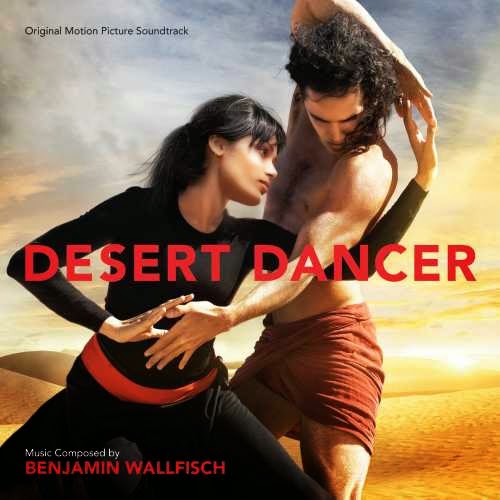 -------------------------------------------------------------------
The upcoming film DESERT DANCER, directed by Richard Raymond, will feature original score by Emmy® and Ivor Novello-nominated composer, Benjamin Wallfisch.  Varèse Sarabande is proud to announce the release of the DESERT DANCER – Original Motion Picture Soundtrack, available on CD and digitally on April 7, 2015.  The original score includes the music for three extended dance sequences featured in the film, especially created for the movie as a collaboration between Wallfisch and award winning choreographer Akram Khan, whose credits include the choreography for the opening ceremony of the 2012 London Olympic Games.
"My collaboration with Benjamin Wallfisch started years before I began shooting Desert Dancer,” emphasizes director Richard Raymond. “Long passionate discussions with Ben – and his responses to those discussions – were the very first building blocks in the creation of this project. For me, Ben’s music was a fundamental part of the creative process. He has managed to convey the tragedy that is an entire generation of youth unable to express themselves artistically in a free society, but also their nobility and their perseverance for artistic truth. The youth of Iran are the heroes of this story and this score is a tribute to them. Both Ben and I have a love of cinema, powerful images and emotive music. It’s been a delight to create something born of that love with such an accomplished composer.”

“I’m so grateful to have had the opportunity to collaborate with Richard, Akram and the entire creative team on this beautiful movie. Richard managed to turn a powerful and important story about the state of freedom of expression in Iran into an inspirational statement of the power of art to give people a sense of freedom, no matter what their circumstance. Afshin Ghaffarian remains one of the most inspirational individuals I’ve met and it was an honor to have been invited to help tell his story through music,” said Benjamin Wallfisch.

Set in Iran, DESERT DANCER’s powerful and unbelievable true story follows the brave ambition of Afshin Ghaffarian. During the volatile climate of the 2009 presidential election, where many cultural freedoms were threatened, Afshin and some friends (including Elaheh played by Freida Pinto) risk their lives and form an underground dance company. Through banned online videos, they learn from timeless legends who cross all cultural divides, such as Michael Jackson, Gene Kelly and Rudolf Nureyev. Afshin and Elaheh also learn much from each other, most importantly how to embrace their passion for dance and for one another.

“Ben captured the essence of the film’s tone with the themes for the characters, and most of all, the desert dance. Ben’s score is rich and emotional, and was the fundamental guiding force for myself and the choreographer towards creating the dance sequences,” explained Raymond. “For Elaheh, I fell in love with the way that Ben utilized a counting pluck to initiate her theme, a complex, guarded character whose dance, addiction, and family tragedy are all inextricably linked. For the desert dance, Ben insisted we needed a score to match the vastness of the desert, yet the intimacy of the experience. He embraced silence and stillness where required and juxtaposed that against loud, earthquake-inducing drums.”

Wallfisch is an Emmy and Ivor Novello nominated composer and has worked on 42 movies to date. He made his scoring debut at the age of 24, composing the music for Thomas Vinterberg's DEAR WENDY (World Soundtrack Awards 'Discovery of the Year' nominee & Danish Film Academy Awards nominee for 'Best Original Score').

He composed, orchestrated and conducted the suspense thriller THE ESCAPIST (Ivor Novello Awards nominee & World Soundtrack Awards 'Discovery of the Year' nominee). Recent scoring projects include HOURS, SUMMER IN FEBRUARY, HAMMER OF THE GODS, THE THIRTEENTH TALE and BHOPAL: A PRAYER FOR RAIN. He is currently scoring WITHIN for New Line Cinema.

He recently co-arranged and orchestrated the 2015 Grammy performance of ‘Happy’ by Pharrell Williams and composed the Steven Spielberg produced short film AUSCHWITZ, which premiered at the 70th anniversary of the liberation of Auschwitz commemoration.