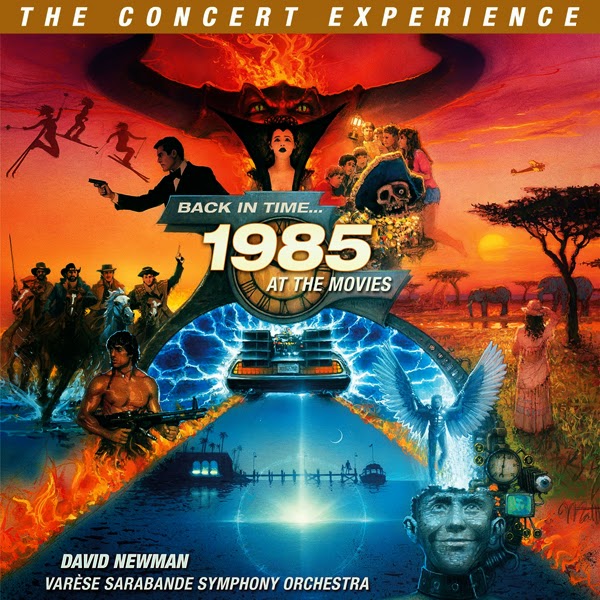 On June 11 in Los Angeles, Varèse Live is collaborating with the Golden State Pops Orchestra presenting its debut concert Back In Time…1985 Live! at the Redondo Beach Performing Arts Center (1935 Manhattan Beach Boulevard, Redondo Beach CA). Back In Time…1985 Live! features live orchestra performances of some of the most-loved scores from the greatest films of 1985 -- ALL celebrating their 30th Anniversary.  The Golden State Pops Orchestra will perform the program under the direction of Maestro Steven Allen Fox with guest performances by top composers including David Newman, Bruce Broughton, David Shire, Christopher Lennertz, Jeff Beal and many more!

The 1980s were a fun, exciting time in pop culture... and especially at the movies!  1985 in particular was a cultural lynchpin for a whole generation.  We traveled through time in Back to the Future, hunted for treasure with The Goonies and hung out with friends in St. Elmo’s Fire.  Music was always part of the adventure; the film scores of Jerry Goldsmith, John Barry and Alan Silvestri, and hit songs by Oingo Boingo, Tina Turner and Brian Ferry instantly conjured up the characters we love from their movies.
And in celebration of the launch of Back In Time…1985 Live!, Varèse Live, in partnership with Varèse Sarabande Records, is offering Back In Time...1985 The Experience, an ultimate music EXPERIENCE for a limited number of dedicated fans who act fast. Each experience package includes:

A pair of VIP-seating concert tickets to Back In Time…1985 Live!

A 6-CD Box Set Back In Time...1985 At The Movies; a comprehensive musical time capsule from 1985 including Academy Award-winning and nominated scores and songs, and a brand new recording featuring David Newman conducting the debut of the Varèse Sarabande Symphony Orchestra — a new all-star orchestra credited with recording the first orchestral album of classic film music in Los Angeles in decades!

To be one of the fans that gets to experience 1985 again now 30 years later…check out https://www.varesesarabande.com/products/back-in-time-the-concert-experience for more information.