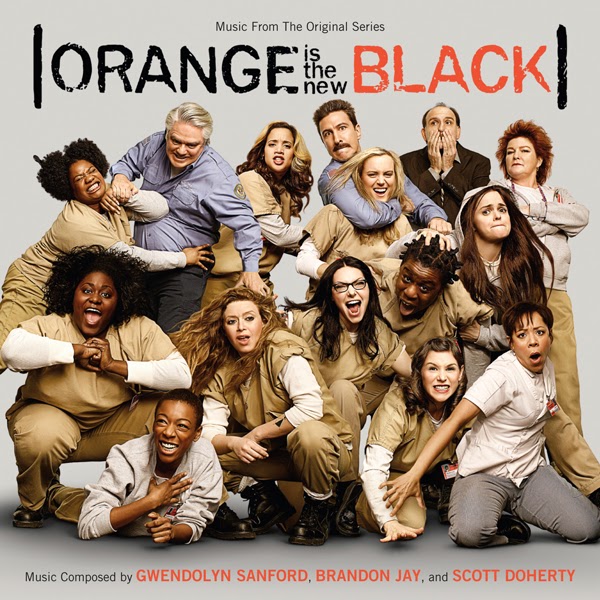 “With binge–watching becoming the norm, one of the best notes we got from Netflix was to try and view the season as one long movie because viewers would be watching many of the episodes back to back,” said Jay. “There is an abundance of wonderfully complex and diverse characters on the show and we feel the music reflects that.”

A crime she committed in her youthful past sends Piper Chapman (Taylor Schilling) to a women's prison, where she trades her comfortable New York life for one of unexpected camaraderie and conflict in an eccentric group of fellow inmates.

“Much like the wide array of emotions the characters go through, the music moves from hopeful to tragic, light-hearted to sinister, many times within the same piece of music,” said Sanford.  “The scene when Piper steps out of the van and walks the long walk into prison for the first time - we scored this a few different ways before finally feeling like we found ‘the sound’ of the show. It was in that moment the dirty electric delay of OITNB was born.”

In the words of School House Rock, “Three is a magic number!” When you combine Gwendolyn Sanford’s keen instincts for storytelling with Brandon Jay’s effortless mayhem and add Scott Doherty’s versatile know-how, a captivating collaboration ensues.  Gwendolyn grew up singing with her family in living room hootenannies, performing in school plays and eventually doing professional theatre. When she began playing guitar, she quickly unearthed a passion for songwriting that would lead her down an unexpected musical path. While working with various producers, she met Joey Waronker & Smokey Hormel (Norah Jones, Tom Waits, Beck). At that time they were finishing up a score for Mike White’s first film Chuck and Buck and asked Gwendolyn to contribute what would end up being the main character’s theme. She fell in love with writing to picture - combining her love for cinema and storytelling with music.

Brandon has been playing drums since he can remember. His mother would lay out pots and pans and other household items for him to bang on – similar items can be found in his percussion basket today! A giant comb, a bicycle wheel, a couple slide whistles, too. Having been the heart and soul of many bands through the years (Lutefisk, Miss Spiritual Tramp, The 88), his piano playing led him to begin writing and ultimately front the circus-like Quazar and the Bamboozled. Shortly after he and Gwendolyn met they took silly up a notch and began writing and producing music for preschoolers known to many as Gwendolyn and the Good Time Gang.

Having three kids, Gwendolyn and the Good Time Gang was a regular favorite in the home of Jenji Kohan (creator of Weeds and Orange Is The New Black). In the search for a composer that would lend a unique sound for Weeds, Jenji asked Gwendolyn and Brandon to audition for the job. They’ve been happily working together for 10 years!


A multi-instrumentalist, Scott has spent years as a songwriter, vocalist, performer, and session player for many popular LA artists, including Jake LaBotz , Brian Wright, and Michael Starr & Co. and the aforementioned Gwendolyn and the Good Time Gang. After years of providing music for shows on HBO, E! Network, MTV, CMT, and Nickelodeon, Scott jumped at the opportunity to score a Netflix original series with his good friends Gwendolyn and Brandon. Together they are the sound of Orange Is The New Black.

“Mostly it’s us taking turns on piano, bass, guitar and drums and adding whatever odd synths or custom samples that lend themselves to the moment,” Jay described.   “We’ve had a couple guest musicians. Michael Starr played fiddle and mandolin on Pennsatucky’s theme and Steve Graeber played some sax for us. Our most out of the ordinary contributor was our dog Duncan who hangs out in the studio with us.  Gwendolyn was doing some high-pitched vocals and he decided to howl along.  We put it through a megaphone and it created an eeriness that really helped the scene.  He’s always standing by for his next cameo.”