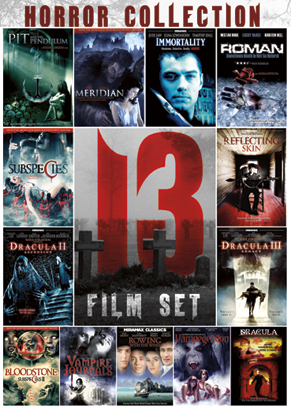 THE PIT AND PENDULUM - Under the direction of Torquemada, a young baker's wife is falsely accused of witchcraft and dragged before the Inquisition.

MERIDIAN - When a young woman visits her recently inherited Italian castle, she discovers that she has also inherited a medieval curse.

IMMORTALITY - A seductive vampire (Jude Law) who always gets what he wants finds his latest conquest to be frustratingly elusive.

ROMAN - When an encounter with the beauty next door (Kristen Bell) goes horribly wrong, a moment of desperation triggers a chilling turn of events for a reclusive social misfit.

SUBSPECIES - Three students studying the folklore of Transylvania stumble upon a clan of vampires ruled by the monstrous Radu.  BLOODSTONE: SUBSPECIES II - Radu's fledgling and love interest, Michelle, flees from his castle with the holy relic—the Bloodstone.

THE REFLECTING SKIN - A mischievous young boy blames the terrible events around him on his widowed neighbor—whom he believes is a vampire. Starring Viggo Mortensen.

VAMPIRE JOURNALS - Zachary is a vampire who seeks revenge against his own kind. His quest has led him to Eastern Europe where the powerful Ash preys.

ROWING WITH THE WIND - Hugh Grant and Elizabeth Hurley join forces in this haunting story of mystery and imagination set during the conception of Mary Shelley's Frankenstein.

VAMPEGEDDON - A goth, vampire-obsessed college student hopes to summon the most prominent blood-sucker of the old world.

THE SATANIC RITES OF DRACULA - Christopher Lee stars as Count Dracula, who fronts a satanic cult that uses a research establishment and real estate business as a cover for its dastardly deeds.

Think you will find a film within this group that you like, well heck yes... I was personally happy to finally get one of the better versions of The Pit and the Pendulum with Lance Henriksen. Great stuff... One Place!
-Jeremy [Retro]
Hosted by Unknown at 12:10 AM