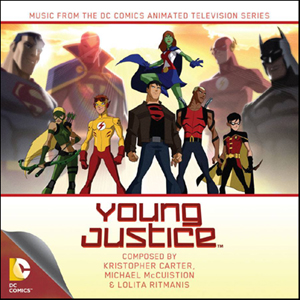 ORDER “YOUNG JUSTICE” NOW.and get your CD booklet autographed by composers Kristopher Carter, Michael McCuistion and Lolita Ritmanis at no additional charge. Autographs are available while supplies last and are NOT guaranteed.


La-La Land Pictures, DC Comics and Warner Bros. Animation present the original soundtrack to the Warner Bros. Animated Television Series YOUNG JUSTICE, as aired on Cartoon Network. Composers Kristopher Carter, Michael McCuistion & Lolita Ritmanis (BATMAN: THE BRAVE AND THE BOLD, BEN 10: ULTIMATE ALIEN, TEEN TITANS, BATMAN BEYOND) fashion an exhilarating superhero score that is every bit as bold, fresh and exciting as this hit animated series. This compilation brings together must-have musical highlights of the show's first season, as well as the second season, YOUNG JUSTICE: INVASION. Produced by the composers and mastered by Doug Schwartz, this is dramatic, action-packed music that makes for a thrilling standalone listen! CD booklet features reversible cover art and in-depth, exclusive liner notes by film music writer John Takis that contain comments from the composers and the animation team!

Now Shipping... Still have time for an autographed copy. Get going they are waiting... score fits the personalty of the show and yes I find myself drawn into these story-lines. As for the score once again each composer offers their take from track to track, sharing the credits to what I can assume will be a score you will want for you collection.
-Jeremy [Retro]
Hosted by Unknown at 12:00 AM