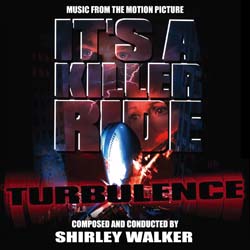 I can only say great things about this score and it's composer "Shirley Walker" as she brings us a score to film that I can remember seeing and thinking what a fantastic score. Action and suspense on a plane and score that holds on it's on as being a epic piece of music. It's one you will want to keep your seat-belts locked and your trays in their up right positions. Really a grand release from La La Records!
-Jeremy [Retro]