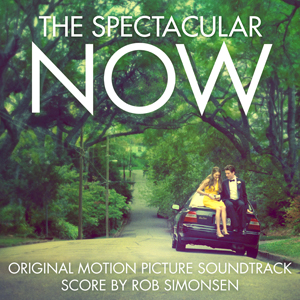 
Lakeshore Records will release THE SPECTACULAR NOW – Original Motion Picture Soundtrack digitally on July 30, 2013.  The album features original music by Rob Simonsen (THE WAY, WAY BACK, SEEKING A FRIEND FOR THE END OF THE WORLD) along with the song “Baby (feat. Dâm-Funk)” by Ariel Pink and “Wakin’ On a Pretty Day” by Kurt Vile and “Song for Zula” by Phosphorescent.

Simonsen said, “the first thing we nailed down was the Amy/Sutter motif.  I wrote that away from picture and sent it to James [Ponsoldt, director] and the producers.  Everyone felt it was right.”  The score, however, was overly not theme-heavy. “Beyond that we shied away from overt themes.  It was much more of an ambient approach, just trying to get the vibe right and set a mood.”

Orchestral works, electronic music, film score and jazz inspire Rob Simonsen’s music. His influences range from Prokofiev and Aphex Twin, Miles Davis and John Barry. He was born into a musical family and began playing the piano by ear at an early age.  His passion for music let him to study music and piano at Southern Oregon State University, University of Oregon, and Portland State University while playing in a variety of ensembles and projects.


Shortly after he successfully collaborated with Mychael Danna on 500 Days of Summer in 2009, he started composing alongside Danna again for the acclaimed TV series Dollhouse. Since then he has scored the features All Good Things, Girl Most Likely, Seeking a Friend for the End of the World. Most recently he worked on the 2013 Sundance hits The Way, Way Back and The Spectacular Now.

With sly humor and an intensity of feeling, THE SPECTACULAR NOW (directed by James Ponsoldt) creates a vivid, three- dimensional portrait of youth confronting the thrilling and perilous business of modern love and adulthood. This is the tale of Sutter Keely (Miles Teller), a high school senior and effortless charmer, and of how he unexpectedly falls in love with “the good girl" Aimee Finecky (Shailene Woodley). What starts as an unlikely romance, becomes a sharp-eyed, straight-up snapshot of the heady confusion and haunting passion of youth – one that doesn’t look for tidy truths. The film was written by Scott Neustadter and Michael H. Weber (500) DAYS OF SUMMER and also features wonderful supporting turns from Brie Larson, Kyle Chandler, Jennifer Jason Leigh, and Mary Elizabeth Winstead.  The film was produced by Tom McNulty, Shawn Levy, Andrew Lauren and Michelle Krumm.


This another great score/soundtrack I get leery on some of the things I get, but this I was very happy to hear... it's got a perky sweet emotion that makes me feel good. I know I say I like everything, I do... I find the goodness in everything. This is a good score, holds my attention from start to finish!
-Jeremy [Retro]
Hosted by Unknown at 12:00 AM