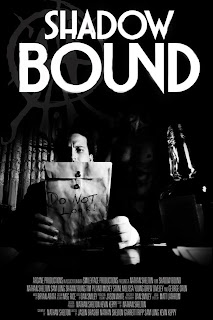 Here is another excellent chance to be a part of something truly special in the cinematic world of horror.  SHADOW BOUND is a black and white silent web series inspired by the works of H.P. Lovecraft.  The story is about a man named Jack Pickman who returns to his home town from the big city to attend his father's funeral who has died under mysterious circumstances.  When he arrives, however, he discovers that his brother has been institutionalized and is no longer the man Jack knew before.   Believing that something more sinister is afoot Jack sets off on his own investigation to discover what happened to both his father and brother and their connection to a strange symbol that seems to be the start of all the strangeness.

This is a horror series that goes in the complete opposite direction of what everybody else is doing out there on the world wide web.  SHADOW BOUND is about story and atmosphere with a silent early 1900's film style.  The goal is to tell a scary story visually without pathetic jump scares and  strewing a bunch of gore and gross stuff about.  It's called class, people.  I am blessed enough to be 1st AD on the project and was allowed to direct the diner scene in the first episode.  Everyone involved in front of and behind the cameras is a remarkable talent.  There is so much work, sacrifice and creativity involved with a large project such as this.  We have done a lot of filming on location too including in the very haunted Pythian Castle which can be seen on t.v.'s HAUNTED COLLECTOR and GHOST LAB.

We are currently filming and we need your help.  So click on the link below and visit our Indiegogo page.  Watch the video and get to know the people behind the creation of SHADOW BOUND.  Nathan Shelton is the writer and star of SHADOW BOUND as well as one of the directors.  He is a true talent.  I cannot stress that enough.  I saw a short sci-fi film he was in a few years back.  It was a really good film but when Nathan was on screen I felt like I was watching BLADE RUNNER for the first time.  His mere presence elevated the look and the feel of the film.  SHADOW BOUND is his creation and with his talent and vision there is no telling how big this series is going to get.   You can easily be a part of it.  Spread the word and donate if you can.  A little bit goes a long way.  All of us on the production team thank you.  Stay in the light, folks.