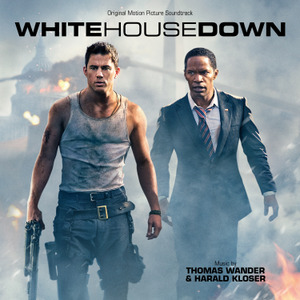 
Capitol Policeman John Cale (Channing Tatum) has just been denied his dream job with the Secret Service of protecting President James Sawyer (Jamie Foxx). Not wanting to let down his little girl with the news, he takes her on a tour of the White House, when the complex is overtaken by a heavily armed paramilitary group. Now, with the nation’s government falling into chaos and time running out, it's up to Cale to save the president, his daughter, and the country.

Say what you will about the film, it's meant to be just a good time... a popcorn film if you will. This is not your typical shoot them up score, there is much more heart and a good balance of "we've got guns" to "hey man I have a story to tell". I find the tracks sometimes shorter than they should, scratching the surface and then on to the next. I think if I take something away from the experience, I think the score is going to be the best part... nice job!
-Jeremy [Retro-Z]

It's a shame it didn't do well, but the music is intense.