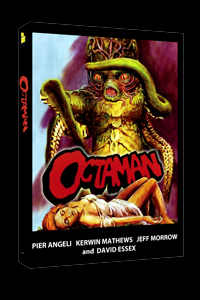 Octaman [1971]
A scientific expedition to  remote Mexican fishing community discovers unhealthy amounts of radioactive waters. They also find a small mutant octopus with nearly human eyes that can crawl on land and make mewling sounds like a baby. In order to receive further funding for their project Dr Torres travels back to the states to make a deal with circus owner Caruso, who is interested in the bizarre mutation as a carny act. They return to the camp to discover that their crew has been slaughtered by someone (or something) and the octopus specimen is missing. A young man from the village says that a local legend about a creture said to be half mand and half sea serpent is true, and offers tot take the scientists to the lake where it is purported to live. What they find is a seven foot tall mutant species of octopus with amazing strength and a lust for killing, and soon the expedition realizes that the monster is now on a bloody rampage. 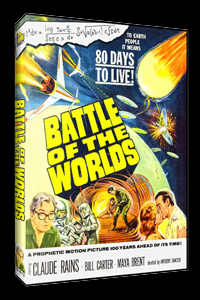 Battle of the Worlds [1961]
A stray planet, on a collision course with Earth, instead slows and takes orbit around our blur marble. An offbeat scientist, Professor Benson (Claude Rains), works around the clock with his team of scientists to try to save the Earth from an imminent crash into the new planet. After careful examination - and a few near-fatal accidents in space - what seems like a dead planet suddenly launches a fleet of flying attack saucers. Professor Benson and his team, along with the space fleet, must figure out how to destroy the invaders. In the end, the frustrated professor is forced to weigh the sacrifices that are required to save the citizens of Earth from certain doom.

Things come in strange packages and these are no different, you know what you get... these are some great classics. Ever heard of them?
-Jeremy [Retro]
Hosted by Unknown at 1:00 AM