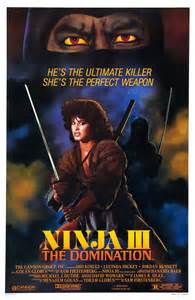 I saw NINJA 3: DOMINATION back in the day when I was a little kid and thought it was the most badass thing I had ever seen.  How could you not be amazed by a ninja that comes out of nowhere onto a golf course kung-fuing four body guards, casually murdering some guy and his girlfriend, throwing ninja stars into the faces of a hundred cops and jumping on a helicopter killing everyone on board allowing it to crash into the water.  Then after all that the little bugger kills a hundred more cops with his ninja sword while getting shot over and over again by the police before throwing smoke and burying himself into hiding.  For a kid in the eighties NINJA 3 was the hella-coolest.....Nowadays I resent the film for reminding of what a stupid kid I was in the eighties.


Honestly though I do like this movie.  It is good silly fun from the good ol' boys at Cannon Films.  How can you hate a movie whose title can't even count?  Its like hating on some kid in a wheelchair just because he is in a wheelchair.  There is no NINJA 1 and there sure as heck ain't no NINJA 2.  I have to ask where did the '3' in NINJA 3 come from?  Sesame Street?  The big problem with NINJA 3 is that almost all the good stuff happens at the beginning of the film.  The movie decides to put on the brakes and try to form some kind of story to justify all the badass shenanigans that just happened.......It didn't do a very good job.  In fact the story went in the most wrongest direction possible.  The ninja is a bad guy that ends up dying and possessing a nearby female utility worker named Christie.  That is pretty random if you ask me.  Then the movie becomes a revenge movie of sorts where the ghost of the ninja takes control of Christie and goes around killing the last five extras playing the cops who just happened to not die from awesome ninja skills of the ninja.  Of course one of the cops falls in love with the girl and they hook up but really its all rather boring.  We want our nearly indestructible ninja back.  This guy could teach Steven Segal what "HARD TO KILL" means.  Click here to read the rest....