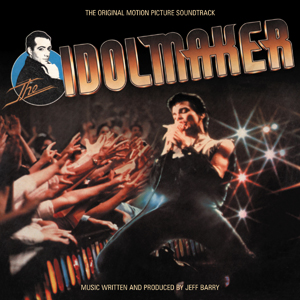 Released By: VARESE SARABANDE
The Idolmaker is based on the life of rock promoter and manager Bob Marcucci, who discovered Frankie Avalon and Fabian (he served as a technical adviser for the production). The film was directed by Academy Award winning director Taylor Hackford (An Officer and a Gentleman, Against All Odds) and was written by Edward Di Lorenzo (Miami Vice, Space 1999). It was also the feature film debut for Peter Gallagher, Joe Pantoliano, and Paul Land.

The Music for the film was written and Produced by Jeff Barry (who, with Ellie Greenwich, penned of some of the most iconic songs of the 60's (including “Be My Baby,” Do-Wah Diddy,” Hanky Panky,” “River Deep Mountain High,” and Chapel of Love”). In addition, he produced all of Neil Diamond’s early hits including “Cherry Cherry,” “Solitary Man,” “Kentucky Woman,” and “Girl You’ll Be A Woman Soon.”

I watched this years ago and found it to be a great film, that brought you closer to what life is behind the stage. The soundtrack/songs dwells deeper into the story by sharing a certain level of charm and music from a era that may or may not have existed.
-Jeremy [Retro]
Hosted by Unknown at 12:00 AM