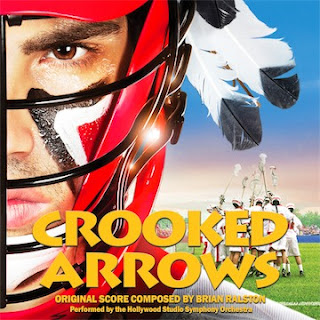 Crooked Arrows centers on Coach Joe Logan, who reluctantly leads a Native American high school team on their unlikely journey to the state lacrosse championship game against their prep school rivals. Along the way, Joe and the team rediscover their connection to the spiritual tradition of the ancient sport of lacrosse. Set in the diverse worlds of modern Native American culture and prep school lacrosse.

Brian Ralston's beautiful score for the best-reviewed sports film in years (this one is about lacrosse), features a sweeping theme, pounding action, as well as ethnic American Indian music, mainly performed by flutist Chris Bleth. Brian conducts the Hollywood Studio Symphony Orchestra. Licensed from the production company, Crooked Arrows, LLC, this is the world-premiere release of this score. Many reviewers actually commented on the music in the film and its originality and beauty. The first track is one of the best I have heard in years!

The first 50 copies will be signed by the composer.