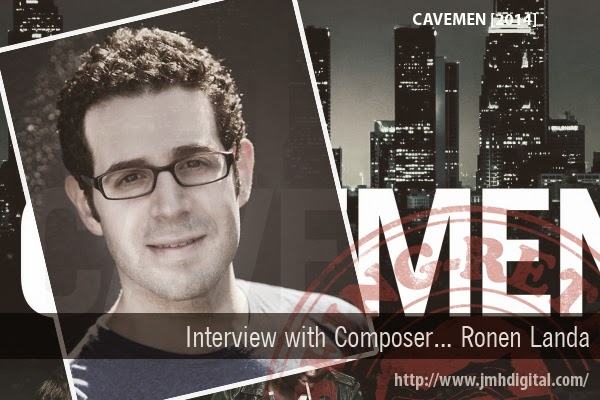 Another great day when I can feature another talented artist/composer... please welcome Ronen Landa... thank you for the time! Sorry for the delays...
Jeremy [Howlin' Wolf]


Jeremy [Howlin' Wolf]: Tell us about your current projects "Cavemen and Home" and how did you become involved in it?

Ronen Landa: I knew CAVEMEN director Herschel Faber from Columbia University circles, and he asked me to score his film. It was such a treat to revisit some of my rock n' roll roots for this score -- much of it is built off my own performances on guitar. The film has some raunchy humor but also a lot of heart, so I really loved composing for all those angles.

HOME is my second horror feature with director Nicholas McCarthy after THE PACT. We approached the music in a similar manner, but with a far broader pallet; I was fortunate to work with some incredibly talented musicians who helped me bring some of my outlandish ideas to life. The score was born of some pretty wild experimentation, and I think audiences will be terrified of the results (in a good way).

CAVEMEN and HOME couldn't be more different from each other, but I'm grateful for the opportunities to keep exploring all that film music has to offer.

Jeremy [Howlin' Wolf]: Seeming good reviews of the current projects, that were debuted at "SXSW"... how does that feel or is it different than previous projects?

Ronen Landa: I'm so appreciative of audiences who see these films and respond to the stories we're telling. Film festival audiences are so enthusiastic and supportive, so it's a pretty amazing experience. I've had films at SXSW and Sundance and some of the other fests, and I absolutely love being a part of that. When the critics are nice to you too, well that's just gravy.

Jeremy [Howlin' Wolf]: What is a typical day for you, how does it start?

Ronen Landa: Typically my day starts like most parents' days I'd imagine -- a semi-hectic frenzy to get my baby daughter dressed and fed and out the door! I like to get my exercise early too, as that helps me feel physically and mentally focused for composing. The rest of the day is about setting out musical challenges for myself and finding a way to meet them. Except during that sacred time known as the coffee break.

About Ronen Landa: Landa released his debut score compilation album, Picturebooks, in 2009. Among his many talented collaborators on Picturebooks are Anna Bulbrook of The Airborne Toxic Event, Emily and Julia Bruskin of the Claremont Trio, Lev Zhurbin of Ljova and the Kontraband, and Malian kora virtuoso Yacouba Sissoko.

Currently, Landa spends time in both Los Angeles and New York City. He received his B.A in Music and Political Science from Columbia University, where he graduated with honors in music, and his M.A. in music composition and film scoring from New York University. He plays guitar, mandolin, oud (Arabic lute), and other stringed instruments.

For more information, please visit www.ronenlanda.com or www.facebook.com/ronenlandamusic.
Hosted by Jeremy [Retro] at 8:17 AM