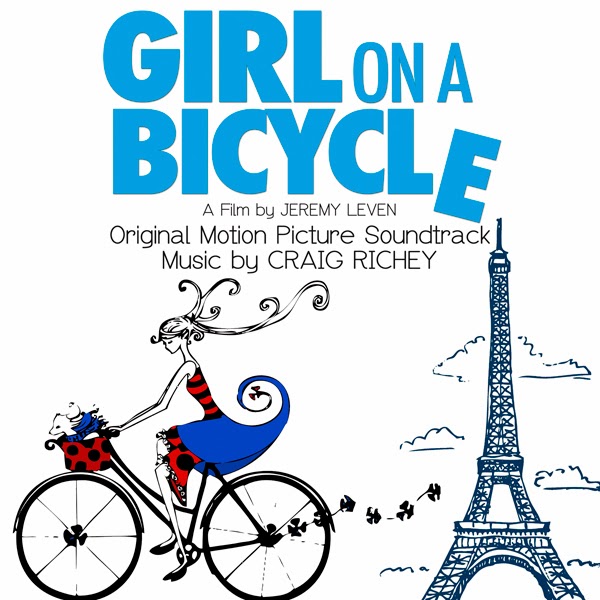 "IT'S THE MOST CHARMING FILM OF THE YEAR."
- Jeffrey Lyons/Lyons Den Radio

GIRL ON A BICYCLE provided Richey with an amazing opportunity – one that most composers only dream of, “The director [Jeremy Leven] gave me a clear request before I had even written a single note, and that was that he wanted the music to be another character in the film. He did not want the music to go unnoticed as backdrop.” Richey described. “That was great information to have, to know that I was being asked to really craft meaningful musical compositions that should become integral to the storytelling. He wanted the melodies to be fully developed, more than just leitmotifs, and so, where my approach may have tended to lean to the more minimal, or shorter melodies, he would encourage me to develop them further...to make them more memorable, to change direction, to modulate the key, to add just one more curl up or down.”

A native of North Carolina, Craig Richey graduated from the Juilliard School of Music with a Master’s Degree in Piano Performance. He began scoring films in New York. His first score, WHEN IT’S OVER, won critical praise in the LA Weekly. Soon after moving to Los Angels in 2000, Craig met writer/director Nicole Holofcener and composed the scores for LOVELY & AMAZING and FRIENDS WITH MONEY.

Richey’s credits include THE WORLD ACCORDING TO DICK CHENEY, and THE SEPTEMBER ISSUE, both critically acclaimed documentaries by R.J. Cutler, ANSWERS TO NOTHING, WONDERFUL WORLD, and THE KING OF KONG: A FISTFUL OF QUARTERS. He is a Sundance Fellow, invited to participate in the Sundance Institute’s 2006 Composers Lab. Also a singer-songwriter, Richey’s songs have appeared in many of his films.

Paolo (Vincenzo Amato), an Italian who drives a Paris tour bus, has just proposed to his true love, the German stewardess, Greta (Nora Tschirner), when the young French beauty, Cécile (Louise Monot) pulls up beside his bus on her bicycle – and, in short order, Paolo, following some very bad advice from his friend, Derek (Paddy Considine), finds himself with a German fiancée, a French “wife”, two Australian children who call him “Papa”, and his life upside-down.

“I started with the romantic love theme, and the scene where Paolo proposes to his girlfriend Greta,” said Richey. “I felt it was important to clearly establish the sense of their bond, their love, which has to survive some fairly unexpected chaos.”

Monterey Media’s theatrical launch of GIRL ON A BICYCLE begins on Valentine’s Day, February 14th. The GIRL ON A BICYCLE – Original Motion Picture Soundtrack will be available digitally and via Amazon on Demand on February 25, 2014.

http://www.lakeshore-records.com/
Hosted by Jeremy [Retro] at 12:00 AM