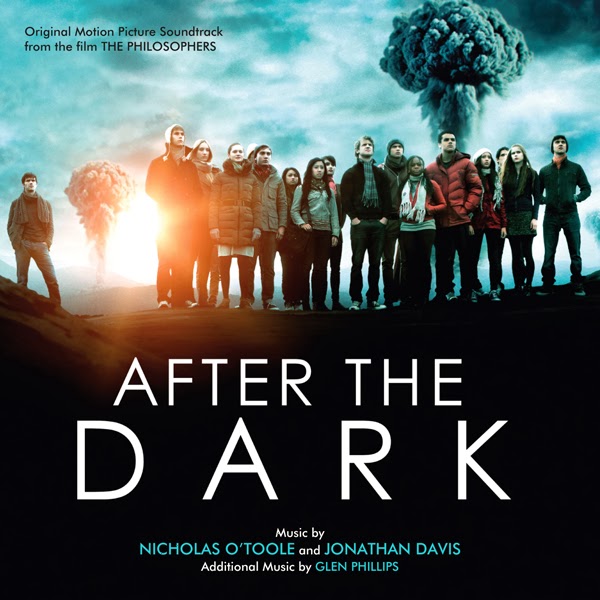 VARÈSE SARABANDE RECORDS PRESENTS:
AFTER THE DARK (AKA THE PHILOSOPHERS)
Composed by Nicholas O’Toole and Jonathan Davis


(February 10, 2014– Los Angeles, CA) – Varèse Sarabande Records will release the AFTER THE DARK Original Motion Picture Soundtrack available digitally on February 11th, and on CD March 4, 2014.  The film, which was written and directed by John Huddles, and produced by Huddles, George Zakk, and Cybill Lui, features an original score by Nicholas O’Toole (NOTHING LEFT TO FEAR, HOW TO BE A SERIAL KILLER) and Jonathan Davis (QUEEN OF THE DAMNED, the band Korn).  The album features additional music by Glen Phillips (the band Toad the Wet Sprocket).

AFTER THE DARK (aka THE PHILOSOPHERS) is set at an international school in Jakarta, where a philosophy teacher (James D'Arcy) challenges his class of twenty students to a final thought experiment. Faced with an impending nuclear apocalypse, they must determine which ten of them would take shelter underground and reboot the human race. The decision quickly becomes deadly as each in the group turns against each other in a desperate fight for survival that blurs the lines between theory and reality.

“The sound palette of the Indonesian gamelan creates music that I’ve always loved, and since this movie is set in Indonesia, my initial urge was to score the whole film with gamelan,” said director John Huddles.  “Ultimately we settled on a fusion approach that combines a synth soundscape with very sparing use of gamelan. We gave ourselves the musical freedom to hybridize sounds that originate from very different cultural sources.”

“Some of the synths are very gritty and harsh and almost passes as percussion or some intense bowed metal sound,” explained O’Toole.  “There were a variety of organic elements that were used prominently and sparingly. For example, there are undertones of Tuvan harmonic throat singing beneath oddly played cello and bassi. There is one cue with Tibetan horns blaring over minimal synthetic beats in a very alerting moment. We used Gamelan instruments, which are familiar and native to the region the film is set in. It was very fun and effective mixing these elements together in a way where they complemented each other.”

Jonathan Davis is the lead singer and bagpipe player for the rock band Ko?n, which formed in Bakersfield, CA in 1993.  Korn has released eleven studio albums, eight of which went Platinum or Multi-Platinum. Ko?n has sold over 35 million records.  Davis was ranked #16 on Hit Parader’s "Heavy Metal's All-Time Top 100 Vocalists".

Davis is a prolific writer and composer who became interested in scoring film in 2002 when he began co-composing the musical score for the movie adaptation of QUEEN OF THE DAMNED.  He also composed the theme song for the 2002 revival of THE TWILIGHT ZONE and performed a cover of Neil Diamond’s “Love On The Rocks” for the movie WONDERLAND.  He began DJing since 1987 and recently began performing all over the world as an EDM producer/DJ under the moniker of JDevil.

Phase 4 Films and Olive Branch Productions present AFTER THE DARK, in theaters in limited release now and on DVD May 6, 2014.  The AFTER THE DARK– Original Motion Picture Soundtrack, Varèse Sarabande Records will be available digitally on February 11th and on CD March 4, 2014.