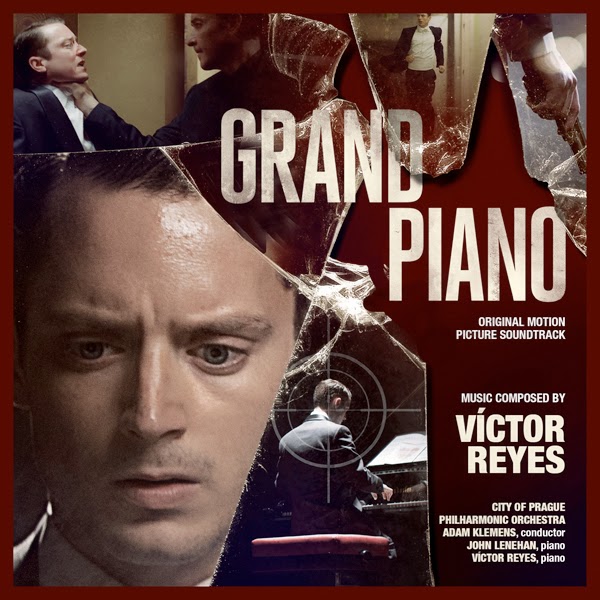 Victor Reyes’ score — incorporating originals and furious arrangements of existing pieces by Beethoven and others — is, needless to say, a relentless asset. (Guy Lodge, Variety) Each arpeggio and every strike of the bow is used to serve and compliment the film’s quieter moments while the orchestra leaps into action when things start to ramp up. (Drew Tinnin, Dread Central)

Reyes energetic and beautifully powerful music greatly aids the tension and fraught atmosphere and is certainly more than a background or a film score.  Both film and score are highly recommended. (John Mansell, Movie Music Italiano)

Not only is the score a fully functioning classical work in its own right, but as it progresses the music actually matches the dynamic and dramatic arc of the film. (Jonathan Broxton)

MovieScore Media/Kronos Records will release the critically acclaimed, award-winning score for Grand Piano by Spanish composer Víctor Reyes. Directed by Eugenio Mira, this high-concept thriller has been described by reviewers as “Speed with a piano”. The plot focuses on concert pianist Tom Selznick who finds an odd note on his sheet music prepared for his next concert - he must play flawlessly or someone will die. Considering this is one of the hardest piano pieces ever, Tom must defeat his inner demons to complete the mission and give us enough time to solve the mystery. Starring Elijah Wood and John Cusack, our release of Grand Piano coincides with the film’s US theatrical premiere on 7 March 2014.

Making his MSM debut is composer Víctor Reyes, who is one of the great emerging talents of the Spanish film music scene with several great international credits to his name. High-concept thrills seems to be a specialty for the composer; possibly his best-known work was written for Buried (2010), starring Ryan Reynolds as a soldier trapped in an underground coffin with only a cell phone providing communication with the outside world. One of Reyes’ other recent credits is Red Lights (2012) in which Sigourney Weaver and Cillian Murphy investigate the supernatural abilities of a blind psychic played by Robert de Niro.

Building upon the traditions of classic Bernard Herrmann scores like Hangover Square or The Man Who Knew Too Much, Grand Piano also features an original concert piece taughtly integrated into the plot. Victor Reyes himself described his work as an “Octopus Concerto” as the player would need eight hands to play it properly - yet pianist John Lenehen excels at delivering a gripping performance for all three movements. The album is bookended by the ”Main Titles” and the notorious ”La Cinquette” which has been described as unplayable in the film, yet Tom Selznick must defeat this monster in order to move ahead in his life...

Very few movies look at the music as a central character as opposed to a simple underscore, but Grand Piano knows is greatest asset and allows it to shine. Victor Reyes’ score had already won the International Film Music Critics Award for ‘Best Original Score for an Action/Adventure/Thriller Film’ and was one of the five scores nominated for the ‘Film Score of the Year’ IFMCA award. It’s also been a recurring guest on many reviewers’ ‘Best of Film Music 2013' lists (Cinematic Sound Radio #3, Reel Music #1) which is quite an achievement that had no commercial release - until now! MovieScore Media is proud to release Victor Reyes’ exceptionally well-crafted and critically noted music for the film.