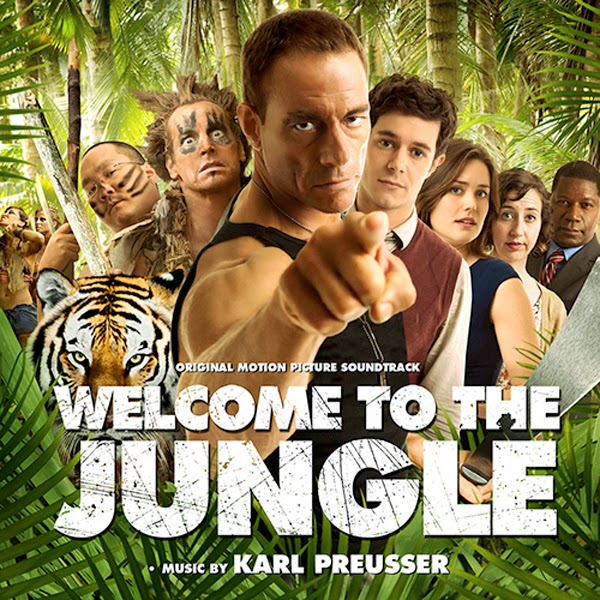 Welcome to the Jungle
Music by: Karl Preusser


Welcome to the Jungle stars Jean-Claude Van Damme in a hilarious send-up of his former roles. The film takes place on a tropical island, where a company retreat is meant to be a routine teambuilding exercise for a group of office workers. Although the office hierarchy is still intact upon arrival, ‘Certified Teamwork Instructor’ Storm Rothchild (Van Damme) takes command, but not everything goes according to plan. Directed by Rob Meltzer (I Am Stamos), Welcome to the Jungle opens of February 7 in US cinemas and Video-On-Demand.

The sidesplittingly epic, tribal-flavored score is provided by composer Karl Preusser who had previously worked with Meltzer on the director’s meta-comedy I Am Stamos. Preusser’s numerous scoring credits include the animated epic Dragonlance: Dragons of Autumn Twilight, the dark drama Ronnie and the Omen-esque thriller I’m Not Jesus Mommy. In addition to composing and orchestrating, Karl also takes pride in conducting most of his works; he is currently writing lyrics and music for an animated feature film. The composer’s concert works include the piano piece ‘Sudoku’, which was premiered live on NBC’s Ellen.

"The true challenge was riding the delicate balance between the comedic moments and the darker, more dramatic ones.” explains Preusser about how he approached scoring the island itself with the music playing the ominous ‘straight-man’ to the insanity happening on screen. “This film can have you buckled over with laughter and then suddenly twist to a moment that feels ‘uncomfortably real’, it definitely kept me on my toes. That said, when you have epic shots of Jean-Claude Van Damme walking and kicking in slow motion, how could you not write an epic theme for his character? I had a blast with it and now I can check that one off my ‘film composer bucket list’!"