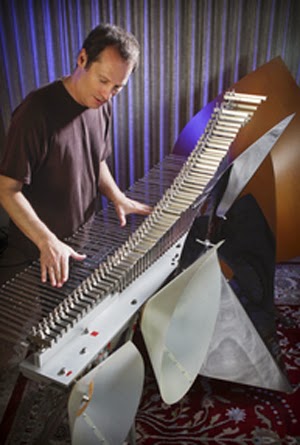 A frequent collaborator of director Steven Soderbergh, Martinez will team with Soderbergh again on the upcoming 10-episode series THE KNICK, which will begin airing late spring on Cinemax. The series, starring Jeremy Bobb, Steve Garfanti and Clive Owen, is set in New York’s Knickerbocker Hospital during the early part of the twentieth century.

“The series takes place in 1900’s New York City and the score will be in Steven’s signature minimalist style,” said Martinez. “One thing I learned from working with Steven Soderbergh through the years was to never be too obvious when expressing your opinion through music.”

Another period piece, Martinez will be composing the music for the upcoming HBO movie THE NORMAL HEART, featuring an all-star cast including Taylor Kitsch, Jonathan Groff, Matt Bomer, Julia Roberts, Jim Parsons, and Mark Rufalo, follows a gay activist attempting to raise HIV/AIDS awareness during the early 1980s. THE NORMAL HEART was directed by Ryan Murphy.

“When I saw a rough cut of THE NORMAL HEART, I knew I needed to be involved with this project,” Martinez said. “Ryan has assembled an amazing cast to tell this very important story. I’m glad to be a part of it.”

Martinez will also be participating in Moogfest, a synthesis of Technology, Art and Music, which takes place in Asheville, NC from April 23-27. In addition to speaking, the festival will feature screenings of SOLARIS and DRIVE.

Cliff Martinez, who was born in the Bronx but raised in Ohio, moved to California in 1976 landing in the middle of the punk movement. After stints as the drummer for the Weirdos, Lydia Lunch and Foetus frontman Jim Thirlwell, and the final incarnation of Captain Beefheart and the Magic Band, Martinez joined the Red Hot Chili Peppers (playing on the band’s first two albums) and later the Dickies. It was during his tenure with the Chili Peppers that Cliff began exploring the new technologies of that era, which would eventually guide him towards the film music world.

A tape Martinez had put together using these new technologies made its rounds, leading him to score an episode of Pee-Wee’s Playhouse. The same recording also ended up in Steven Soderbergh’s hands and Martinez was hired to score the famed director’s first theatrical release 1989’s sex, lies, and videotape. Martinez’s longstanding relationship with Soderbergh has continued through the years and they have worked together on ten theatrical releases including Kafka, The Limey, Traffic, Solaris and 2011’s Contagion.

Perhaps it is because of his time in the punk scene that Martinez’s approach to scoring is nontraditional. His scores tend towards being stark and sparse, utilizing a modern tonal palette to paint the backdrop for films that are often dark, psychological stories like Pump Up the Volume (1990), The Limey (2009) Wonderland (2003), Wicker Park (2004), and Drive (2011). Martinez has been nominated for a Grammy Award (Steven Soderbergh’s Traffic), a Cesar Award (Xavier Giannoli’s A L’origine), and a Broadcast Film Critics Award (Drive).

Still the drummer at heart, Martinez’s use of audio manipulations, particularly for percussive sounds, has been evolving through the years and is evident by the hammered dulcimer of Kafka (1991), the gray-areas between sound design and score for Traffic (2000), the steel drums and textures of Solaris (2002), what Martinez called ‘rhythmi-tizing pitched, ambient textures’ of Narc (2002), and ‘using percussion performances to trigger and shape the rhythmic and tonal characteristics of those ambient textures,’ as he described his score for 2011’s The Lincoln Lawyer. Martinez’s recent films include Robert Redford’s The Company You Keep, Nicholas Jarecki’s Arbitrage, and Harmony Korine’s Spring Breakers (co-composed with Skrillex). His second film with Drive director Nicolas Winding Refn, Only God Forgives, earned Martinez a 2014 Robert Award (Danish Academy Award).
Hosted by Jeremy [Retro] at 11:50 AM