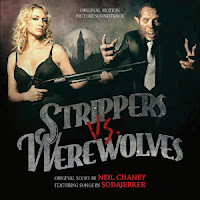 
Evoking a wonderful 1980s horror movie vibe, Neil Chaney’s score for the UK cult movie Strippers vs Werewolves is effectively combined with a selection of songs by Sodajerker, a highly talented Liverpool-based songwriting team whose songs forStrippers vs Werewolves showcases bright ideas and influences by such classy acts as Pet Shop Boys, Duran Duran and Erasure.

The film itself, directed by Jonathan Glendening (Night Wolf), is a hilarious mix of horror and comedy where a bunch of strippers are forced to deal with hungry werewolves seeking vengeance after their chief has beeen accidentally killed in a strip club. The dialogue features such memorable lines as “she had such great legs…have you found the other one…?” and has an amusingly smart and cheeky script according to Screen Daily, and is a “silly, funny, lighthearted good time with plenty of action and grue” according to Dread Central. Release date (digital only): September 25, 2012