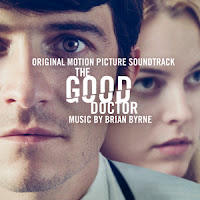 
Martin Blake (Orlando Bloom) is an ambitious but anxious young doctor, eager to impress his superiors and colleagues: Chief Resident Waylans (Rob Morrow), self-assured fellow intern Dan (Troy Garity) and no-nonsense nurse Theresa (Taraji P. Henson). But things are not going Martin’s way and he can’t seem to shake off his insecurities. When 18-year-old patient Diane (Riley Keough) is admitted for a kidney infection, Martin steps in, getting the much-needed boost of self-esteem he craves. But things take a dark turn as his enthusiasm begins to become an obsession.

Byrne was influenced by the medical setting of The Good Doctor in his approach to the score.  “I wanted to use the sound of a heart monitor as a percussive sound along with the live strings,” he described. “I really liked this effect as it put the hospital into the score.”

5/5 Yes... another THRILLER, but if I write with bigger letters it might seem more spooky! It is a great score full of wonderful temperatures of music...
-Jeremy [Retro-Zombie]
Hosted by Unknown at 3:30 AM