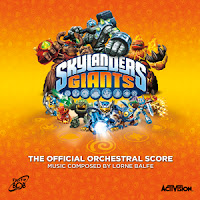 
Composer Lorne Balfe (Skylanders: Spyro’s Adventure, The Sweeney) returns to the Skylands with the soundtrack for Skylanders: Giants. The soundtrack is currently available digitally through all major providers in advance of the release of the Activision game on October 21st.

ABOUT SKYLANDERS: GIANTS
Thousands of years ago, the Giants fought epic battles in Skylands but were banished to Earth. With a new threat looming, it's time to bring them back to join forces with the Skylanders to defeat KAOS. Only you can put them on the Portal of Power® to unleash their strength in the ultimate battle to save Skylands!

5/5 How did this one slip between my fingers, I was shocked... it is never too late to share! It is a rousing piece from  Lorne Balfe, though it's a short score... still worthy.
-Jeremy [Retro-Zombie]
Hosted by Unknown at 3:30 AM

Email ThisBlogThis!Share to TwitterShare to FacebookShare to Pinterest
Labels: Activision