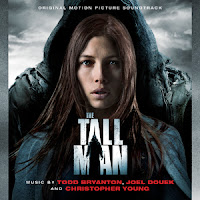 Starring Jessica Biel as a mother whose child has gone missing,The Tall Man features a dark and haunting soundtrack featuring an exciting and adreanaline-driving score by two up and coming film composers, Todd Bryanton and Joel Douek, and one of the film music industry’s true icons, Christopher Young (Hellraiser, Drag Me to Hell, Priest, The Fly II, The Exorcism of Emily Rose).

The music effectively captures the dark legend of the Tall Man, but also features tender and more melodic moments of love and reflection. Screamworks Records is proud to present this album, produced by George Acogny (Blood Diamond, Bridge to Terabithia, Faces in the Crowd), in conjunction with the theatrical releases of the film in USA and France
5/5 Not to be confused with another Tall Man and if you don't know shame on you... this is a variety of different sounds as it brought to you by three talents.
-Jeremy [Retro-Zombie]
Hosted by Unknown at 12:00 AM