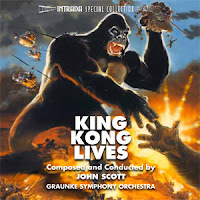 Much belated U.S. premiere on CD of dynamic, thrilling John Scott score for John Guillerman film about the big ape's new love... and his rampage when things don't go well. Scott creates rich overall theme for Kong and his lady and powerful edgier theme for arch enemy Col. Nemit. Both play throughout score in dramatic manner. Highlights are many but "Lady Kong Gets Gassed" merits spotlight. Scott also does courtesy of ending what he starts with stirring, fortissimo coda in major key. Powerful! Scott produced album in 1987, representing every major sequence of his score for terrific a record. CD did happen in Japan but only with intrusive ape roars. Happily, UMG vault masters of original U.S. album were available in perfect condition... without the grunts.

5/5 On the KONG scale, oh why did the score have to be better than the film. I am not to sure, but you are a fan you must get this release from Intrada.
-Jeremy [Retro-Zombie]
Hosted by Unknown at 12:30 AM