October 14: Curse of the Puppet Master 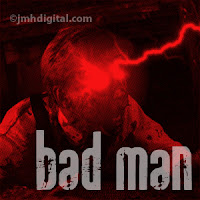 What were they thinking... I am dizzy to where this story may have gone?
-Jeremy [Retro-Zombie]