I wanted to put many of these scores on a separate post, but I have been over run by "Horror Scores" this month I wanted to share them... they are all by the same great label "Screamworks Records" and all available now!! 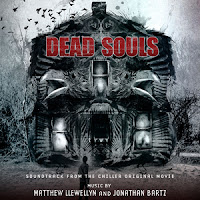 Screamworks Records proudly presents one of the most impressive genre scores we’ve heard recently: the large orchestral score for the original Chiller movie, Dead Souls, an adaptation of the Michael Laimo novel starring Bill Moseley and Jesse James. Composers Matthew Llewellyn and Jonathan Bartz (both scoring team members on several Brian Tyler scores including The Expendables 2 and Final Destination 5) has created a wonderfully old-school horror score that pays tribute, above all, to Bernard Herrmann but also more modern scoring icons such as Alan Silvestri (the action writing) and John Williams (the romantic material). 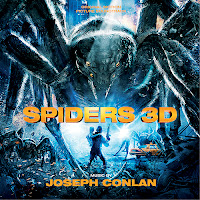 Featuring a vibrant and exciting score composed by veteran composer and two time Emmy nominee Joseph Conlan (Toolbox Murders, Mortuary, Behind Enemy Lines: Colombia), Tibor Takacs’ 3D spectacular Spiders 3D is currently gaining success at various festivals, including the Los Angeles 3D Film Festival where it won several awards, and will soon be in cinemas and on DVD throughout the world.

The soundtrack is filled with tense action music and is a modern hybrid score where orchestral flavors meet attractive electronics and pounding rhythm programming. While the score is modern in style, it also has more majestic, larger-than-life elements that evokes the awe and wonder juxtaposing the sheer terror of the giant monsters in the film. Spiders 3D is a fun and entertaining monster score that will attract a lot of fans of the genre! 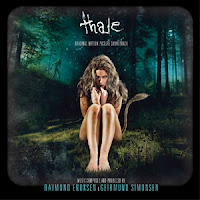 Following last year’s surprise hit from Norway, Troll Hunter, the fantasy thriller Thale combines Norwegian folklore with contemporary thriller storytelling. The film has a quickly growing fanbase and is on the verge of reaching cult status, currently being shown in festivals and getting its US release early 2013.

Screamworks Records is proud to release the original score from the film, composed by Raymond Enoksen and Geirmund Simonsen who works out of Dreamscores Studios in Oslo. Their atmospherically rich and stylistically unique contribution to the film makes use of Norwegian folk music elements, beautiful cello, fiddle and vocal solos (sung by folk music specialist Liv Ulvik) and mesmerizing, ominous and foreboding electronic sonorities. It is one of those scores that get under your skin with its seductive beauty and underlying elements of terror! 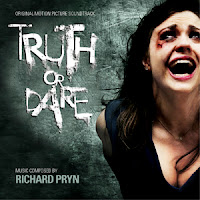 Described by Shock Horror Magazine as “shockingly good” and by Horrorhound Magazine as “superbly suspenseful, smart, sexy and grisly”, UK horror film Truth or Dare (known as Truth or Die in the USA) features a dark and mesmerizing score by newcomer Richard Pryn. Truth or Dare is his first major feature film where he showcases an intense and adrenaline-pumping style where extremely dark sonorities meet elements of orchestral avant garde, industrial distortion (Pryn achieved a distinction in electric guitar performance at the ACM in Guildford!) and unsettling harmonic textures.
Truth or Dare is a modern horror score with diverse elements and one that keeps its audience on the edge of its seats – just like a horror score is supposed to!

5/5 Oh and by the way, they are awesome and a great addition for you collection!!
-Jeremy [Retro-Zombie]
Hosted by Unknown at 12:00 AM

Lots of scary music to add to the Halloween atmosphere around here. Yes!