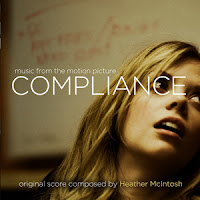 When a police officer tells you to do something, you do it. Right?

Inspired by true events, COMPLIANCE tells the chilling story of just how far one might go to obey a figure of authority. On a particularly busy day at a suburban Ohio fast food joint, high-strung manager Sandra (Ann Dowd (Garden State) receives a phone call from a police officer saying that an employee, a pretty young blonde named Becky (newcomer Dreama Walker) has stolen money from a customer. Convinced she's only doing what's right, Sandra commences the investigation, following step-by-step instructions from the officer at the other end of the line, no matter how invasive they become. As we watch, we ask ourselves two questions: “Why don’t they just say no?” and the more troubling, "Am I certain I wouldn't do the same?"

5/5 I heard many mixed reviews and feelings about this film, good thing I am reviewing the score... I find it riveting, compelling and very moving. I feel the music is worth a listen and that Heather McIntosh has done a great job telling the story.
-Jeremy [Retro-Zombie]
Hosted by Unknown at 3:30 AM