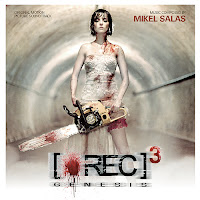 
As Variety pointed out in their positive review of the film, [Rec] 3: Genesis features a “full-blown score by Mikel Salas” that “moves things even further away from [Rec] 2, which had no musical accompaniment.” Indeed, the third entry in Paco Plaza’s acclaimed Rec series takes the franchise in a new direction and Screamworks Records is proud to present the first ever Rec score – an aggressive, but also sometimes poignant and beautiful, orchestral horror soundtrack that really delivers when it comes to blood-curling excitement.

5/5 Mikel Salas does a great job bringing the scare out of us!
-Jeremy [Retro-Zombie]
Hosted by Unknown at 12:00 AM