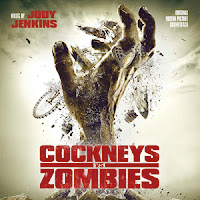 
UK zombie comedy Cockneys vs Zombies features a “satisfying mix of gore and gorblimey charm” (The Telegraph) and caused one critic “lurching forwards and rocking with laughter” (The Evening Standard) – and one of the key elements in making the wonderful mix of gore and giggles work is Jody Jenkins’ amazing score. A stylistic mix of wild music for orchestra and choir (“The Latvian Zombie Chorus”!), electric guitars, Zimmer-esque heroism, blues and classic zombie soundtracks (Goblin and Fabio Frizzi), the Cockneys vs Zombies score has a wonderful tongue-in-cheek seriousness that makes the album listening experience a hilarious experience.

Our release of the soundtrack follows hot on the heels of the theatrical release of the film in the UK – film will get its US premiere at Fantasy Film Fest on September 23.

5/5 Rousing Upbeat...Zombie sing along, kidding it is a great score!
-Jeremy [Retro-Zombie]
Hosted by Unknown at 12:00 AM