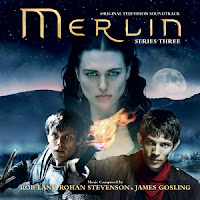 Due to public demand, MovieScore Media follows up our two previous Merlin soundtracks from the first two seasons of the series with music from the third and fourth series. The composers from the previous two returns in exquisite form: for Merlin, Rob Lane, Rohan Stevenson and James Gosling has composed some of the most epic music written for the television medium in recent years. The entertaining score album for Series Three has been meticulously sequenced to make for a great listening experience that highlights the best of the music, and the composers have taken into special account requests from fans of the series when the album was put together. Beautiful themes, swashbuckling action music, dark and mesmerizing suspense scoring, quirky scherzos – all painted on an epic canvas featuring orchestra and choir. 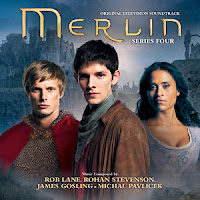 Relive the magic of the Merlin series with the music – and be sure to get both this and the music for Series Three, also out now on MovieScore Media! Both album release co-incide with the launch of Series Five on BBC1.

SIII 5/5 and SIV 5/5 If you know me and I think you might you know I am a fan of this style of score/soundtrack and as a bonus you get to choose between both season's 3 and 4. (Note: these are not a set, each sold individually)
-Jeremy [Retro-Zombie]
Hosted by Unknown at 12:00 AM

MERLIN definitely has one of the best TV soundtracks out there!